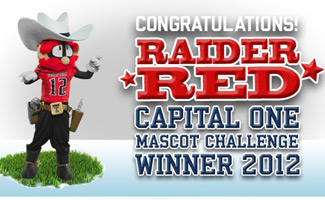 Red took second place out of 16 mascots in regular-season voting to contend for the most votes nationwide; he then faced the first-place and undefeated Cocky the Gamecock from the University of South Carolina in the final round.

The Capital One National Mascot of the Year is determined by Internet voting. The championship round voting ended Dec. 17, and the winner was announced during the 2013 Capital One Bowl today (Jan. 1). Each of the 2012 participants also received $5,000 for their university mascot program.

Raider Red’s only regular-season loss came in week one against the University of Delaware’s YoUDee, who was eliminated in the quarter-finals. Red competed against Sebastian the Ibis of the University of Miami in the semi-final round. 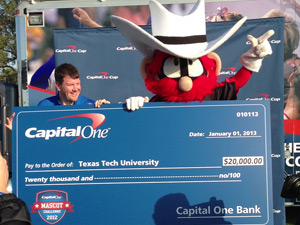 “Thanks to the thousands of students, alumni, fans, and Texas Tech faculty and staff who voted tirelessly over the past 15 weeks and also to the media for helping us get the word out, Texas Tech has a National Champion in Raider Red, the best mascot in the country,” said Stephanie Rhode, director of Texas Tech’s Spirit Squads.

“We are so very proud and honored for Raider Red to be the National Mascot of the Year,” said Bruce Bills, Texas Tech’s cheer coach. “Thanks to all the fans and supporters that made this possible. We appreciate all who supported our effort and spent long hours voting for Raider Red throughout the Mascot Challenge.

“Raider Red is such a great representation of the true Texas Tech Spirit. We are so excited to celebrate this accomplishment with all the Red Raider Nation,” Bills said.