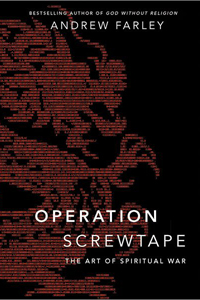 In the corporate world of hell, the demon Screwtape failed to help his novice soul-snatching nephew Wormwood capture the soul of a British man during World War II in C.S. Lewis’ classic Christian-themed novel “The Screwtape Letters.”

In a new sequel, “Operation Screwtape: The Art of Spiritual War,” Texas Tech University professor of linguistics and evangelical pastor Andrew Farley has taken the tale and modernized it with new themes relevant to today’s society, while incorporating classic themes of grace, forgiveness and identity.

The new novel is published by Baker Publishing Group.
In his book, Farley makes himself a character in the book who discovers a device containing thousands of archived files that reveal a worldwide spiritual conspiracy.

Operation Screwtape, the largest of these files, details an intelligent scheme to steal, kill and destroy. At great personal risk to himself and his reputation, Farley translates this document and makes it available to the world. It’s up to the reader to decide what he or she will do with the information.

“The original story details correspondence between two demons who are conspiring against humanity,” Farley said. “It’s fiction, but in Lewis’s mind, it’s also nonfiction. There’s an underlying message he believed in. In ‘Operation Screwtape,’ what I’m doing on the 50th anniversary of Lewis’ death is introducing all new themes and content in a modern-day rendition. The book is framed around three stratagems: steal, kill and destroy.”

The reader learns about the rise and fall of Screwtape in the beginning of Farley’s novel. Screwtape’s failure serves as a case study, and Operation Screwtape becomes as a combat manual for soul reapers within the House of Corrections for Incompetent Tempters, Farley said.

Farley, who read the original novel as a teenager, said he worked hard to create continuity between the old novel and his new work.

“I wanted to take on some of its language and get the same voice,” he said. “I also wanted to update the combat strategies, so I read books on martial arts and war and looked at some of Hitler’s speeches. I wanted to provoke the reader to think about the content by using combative language. I knew the job was done when I was reading the final draft and it no longer felt like I wrote the book.”

Tempters using Operation Screwtape as a guide are taught to confuse and divide rather than simply encourage overtly evil activities in the souls they are harvesting for “Our Father Below.” Demons learn humans can be suckers for self-improvement and subsequent pride, trying to look better or seem better to the public.

Tactics also include stealing one’s security and destroying unity so that people of faith will fight and bicker over the details and doctrine rather than looking at the big picture – what they have in common to celebrate. 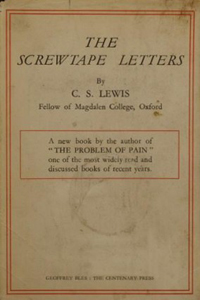 “As I’m looking at today’s flavors of Christianity, in some cases there’s a whole lot of politics mixed in,” he said. “I’m talking about the tantalizing distraction of changing faith into a political agenda, marching on Washington trying to influence political views when really that’s not what is at the core of our faith in Christianity. C.S. Lewis didn’t really address this like I do. But it’s so prevalent today, at least in American culture. For many, being a Christian is synonymous with being certain things politically. This book shows the divorce of those two notions and allows the reader to consider that maybe they’ve been distracted in some ways from what is most important.”

The style of the book – observing correspondence or reading literature intended for another audience – is part of the genius Lewis created to get his point across, Farley said. The reader is disarmed because they get to see issues from the enemy’s perspective as a third-party eavesdropper.

“That’s what really makes things interesting for the reader,” Farley said. “When a person of traditional Christian beliefs thinks of the enemy, they conceive of him as a horned devil who wants to tempt them to do evil looking things.  In ‘Operation Screwtape,’ I’m saying let’s go back to the Garden of Eden and look at the original temptation. The serpent says to Eve to eat the fruit from the Tree of the Knowledge of Good and Evil in order to be like God. It’s a very good-looking temptation.  He says she will look like, think like and be like God. It’s a very interesting form of distraction or temptation because the bait was not something that looked overtly evil.  It looked very good.”

This is Farley’s fifth book. He is also author of “The Naked Gospel” and “A Climate For Change: Global Warming Facts For Faith-Based Decisions,” which he co-wrote with his wife, Katharine Hayhoe, who is a climate scientist at Texas Tech.