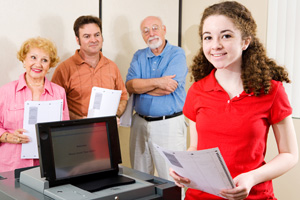 Texas Tech research shows that our parents have the largest effect on our political beliefs.

The world of politics has known for years that parents serve as the primary transmitters of political values, said Gregg Murray, an assistant professor of Political Science at Texas Tech and co-author of Parenting Styles, Socialization and the Transmission of Political Ideology and Partisanship. However, the transmission is hardly perfect, and political scientists want to know why some children retained less of their parents’ political beliefs than others.

The research was published Tuesday (Dec. 4) in the peer-reviewed journal, Politics & Policy.

“This study began when I was at the College at Brockport, State University of New York with my colleague and co-author, Matthew Mulvaney,” Murray said. “Matt is a developmental psychologist interested in parent-child interactions and how they affect child outcomes. I’m a political scientist working on understanding political beliefs and behaviors. Our interests intersect in that we were both interested in looking at what it was that could help explain some of the variation in how important political values such as ideology and partisanship are transmitted. There’s a lot of research showing that our parents have the largest effect by far on our political beliefs, but much of this research also shows our agreement in these beliefs with our parents is far from perfect. Our part of the argument is some parents interact with their children differently than others.” 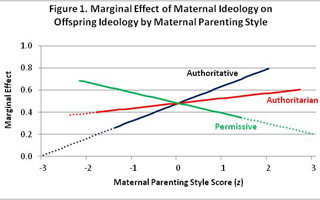 The marginal effect of maternal ideology on offspring ideology by maternal parenting style. (Click to enlarge.)

Mulvaney, an associate professor of child and family studies at Syracuse University, said very little psychologically oriented research exists about how parenting affects a child’s political compass, so the two combined expertise to come up with a study that could gauge the effect of parenting style on the political affiliations of offspring.

“I tried to help think about how psychologists conceptualize variations in parenting and add this to Gregg’s expertise in political attitudes,” Mulvaney said. “Gregg, of course, has a lot of behavioral/psychological background and perspective and I was interested in how parenting affected the development of values. We were both new faculty looking to start a research program and this was one part of that.”

About 160 college students were surveyed by questionnaires asking them about political values, partisanship and political issue positions on topics such as abortion, gun control and environmental issues. These students also were asked about their childhood experiences with their parents, how they grew up and how they were treated by parents. 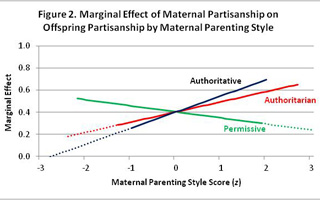 These students’ mothers then were called and asked the same questions in a telephone interview. As the two looked at the data, they found authoritative “gold standard” parents the best transmitters of political ideologies. Authoritarian disciplinarians weren’t as successful at transmitting their political beliefs, and the more permissive a parent behaved, the less likely the child was to pick up on that parent’s political ideologies.

“The most important thing we learn, in my view, is that parenting matters a lot more than previous research would suggest,” Mulvaney said. “This highlights the importance of how parents interact with children that determines how children’s attitudes get formed- either in congruence with parents’ ideals or not.”

Murray admits the sample was small and came from nationally unrepresentative, similar backgrounds. But while more research needs to be done with larger groups and both parents to confirm the findings, the results do show that different parenting styles do affect how a child’s political belief system is impacted by his or her parents.

“Some parents are more likeable than others. Some kids want to follow their parents some want to get away from their parents. So, there’s an aspect of common sense involved here. I do think it needs to be looked at much more broadly.”