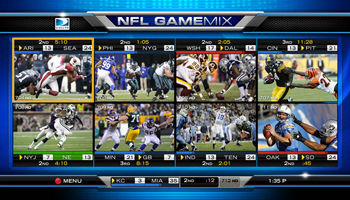 The NFL Game Max Channel allows fans to view many games at once.

Beginning Saturday (Dec. 15) there is a college football bowl game nearly every day or night until the Jan. 7 championship game – 35 of them in all – with broadcast advertising dollars and audience reach attached to them. With so many games and viewing choices, how do the networks keep fans engaged?

A Texas Tech researcher has studied how one particularly novel broadcast technology addresses that challenge, and whether or not it works.

Glenn Cummins, an assistant professor in the College of Media and Communication looked at a method that showed the game using a mosaic format, where multiple camera angles were shown simultaneously.

His findings, “Can Visual Complexity Impact Appreciation of Mediated Sports? Team Identification and Viewer Response to a Complex Presentation of College Football,” were published in the International Journal of Sport Communication. His research team also included Ed Youngblood and Mike Milford, both of Auburn University.

“Networks use a variety of production techniques to sustain interest in a sports broadcast,” Cummins said. “These mosaic formats are becoming increasingly common for hard-core sports fans. For example, NFL’s GameMix channel lets football fanatics monitor eight games at once.”

The study tested how this visually complex format impacted the viewing experience for viewers who were die-hard fans of one of the teams depicted as well as those who didn’t have any ties to the team.

“To do this, we collected data both here at Texas Tech as well as at Auburn University,” Cummins said. “Students at both schools watched either a traditional game broadcast or the mosaic-style broadcast and rated how much they enjoyed the experience.”

Catering to All Types of Sports Fans 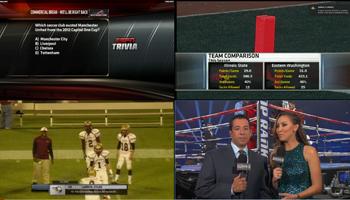 “All this speaks to networks’ growing desire to cater to different segments of the viewing audience and provide a viewing experience custom tailored to sports fans of all types,” Cummins said. “We’re seeing more and more of this technology in living rooms, and I think broadcasters are recognizing these changes in the viewing experience, and trying to come up with ways to capitalize on them.”

Using technological embellishments over a broadcast is useful for networks because there are so many things they can’t control. What they can control are the technological bells and whistles they put on top of a broadcast.

Cummins said, looking at the history of sports broadcasting, there have been changes over time. Many people talked about how television changed sports; how sports changed television – the symbiotic relationship between television and sports. This is something that has had a lot of attention in scholarly literature for the past few decades.