He needs your votes to defeat Cocky the Gamecock and win the $20,000 grand prize. 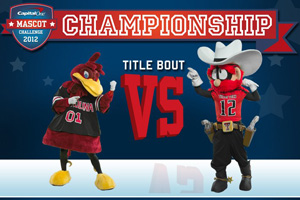 When the dust and gun smoke settled at 11 a.m. today (Dec. 10), Raider Red, Texas Tech University’s costumed mascot, was still standing – with his guns up – to make it to the final round in the Capital One 2012 Mascot Challenge.

Raider Red’s only regular-season loss came in week one against the University of Delaware’s YoUDee, who was eliminated in the quarter-finals.

“First, we want to thank everyone who has voted; the individuals, groups, and the media for helping us get the word out,” said Stephanie Rhode, director for Texas Tech’s spirit squads. “Since the final round comes during academic finals and graduation week, we need everyone – students, staff, alumni and community members to continue to vote as many times as they can, all week long. We will have voting power hours each night, but fans must vote any time they have free time.”