Despite the popular myths (Maya calendar, Earth-bound asteroids), Dec. 21 will be an ordinary day.

We’re nearing the end of the 13th baktun.

Each day, we grow closer to the end of the Maya calendar. And after the Hollywood blockbuster “2012” used the end of a Maya calendar as the preface for the end of the world, so many worry the end could very well be nigh that the U.S. government issued a statement the world wasn’t going to end after all.

But if you’re a conspiracy theorist, how can you trust the U.S. government?

Not to worry, said Brett Houk, an archaeologist and associate professor at Texas Tech University who studies Mesoamerican history. Each summer, he and his students travel to Chan Chich in Belize, a city that sprang up about 700 B.C. and ended about 900 A.D.

The calendar in question causing all the consternation, called the Long Count was one of several used by the Maya, he said. And while they don’t count exactly like the modern calendar, in one respect, they do work exactly the same.

“When the calendar ends, it’s just going to start over again,” Houk said. “When it hits the end of the 13th baktun, it’s the end of the 144,000 days in the last cycle of the Long Count calendar, and it will just click forward like the odometer in a car. It’s really just a big cycle. This Long Count calendar is one of several calendars the Mayans used. It counted forward from the creation date in 3114 B.C.”

The Maya (Mayan refers only to the language spoken, Houk said) used several calendars, one of which was 52 years long. The purpose of the Long Count calendar, comprised of 13 segments called baktuns that lasted 144,000 days or 394 years, was for the Maya royalty to keep up with their dynasties and count back in time to see what ruler did what to keep track of important historical footnotes.

“If something happened more than 52 years ago, the 52-year calendar becomes meaningless,” Houk said. “So the Maya created this Long Count calendar as a way to count back in time and a way royalty could keep track of when grandfather was born or when a certain king did something. They didn't use it to look forward as much as back. They occasionally would mention dates in the future. There’s a fairly recent discovery that mentions a king and the 13th baktun. But they don't say ‘it's the end of the world.’ They're playing with numbers and playing or showing off with their math ability. They weren't predicting anything.

Is the Answer in the Sky?

What about messages in the stars?

Some have stated the importance of the calendar’s end on winter solstice combined and peppered that fact with tales of special planetary alignments that serve as a harbinger of cataclysms to come.

But don’t freak out yet, Houk said.

“I get that question a lot about how astronomy may be connected,” he said. “The Maya couldn’t predict anything like an alignment of planets or if magnetic poles would reverse. It’s just coincidence that their calendar ends on winter solstice.” 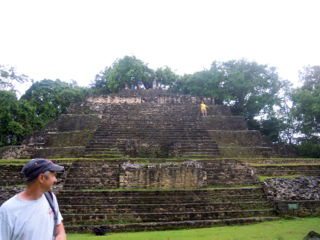 Along with the Maya end-of-the-world scenarios infecting the Internet, some predict an asteroid will bring an end to our blue planet.

It’s true that seven asteroids, including the three-mile-long Toutatis, will make close passes to Earth during December. But even this monster space rock passed by with 4.3 million miles (about 18 times the distance of the moon to the Earth) to spare, said Collin Smith, an information technology unit manager in the Department of Mathematics & Statistics and treasurer of the South Plains Astronomy Club.

“Toutatis carries the greatest risk to our world of the near-Earth asteroids we know of today,” Smith said. “Apophis, a somewhat less deadly, but still very dangerous asteroid, has a better chance of smashing into us. For astronomers, it’s not a question of if a big asteroid or comet will hit us someday, only a question of when. But just like a geological perspective, the astronomical timescale is, well, astronomical. In terms of risk, it’s highly unlikely we’ll get hit by any of these anytime soon.”

The gas giant Jupiter acts as a policeman for the inner planets of the solar system by either sucking up asteroids or comets with its enormous gravitational pull or scattering them back into space.

“Jupiter doesn’t keep out everything, but most space stuff has to deal with its enormous gravity and size,” he said. “And the sun itself gobbles several comets annually.”

And while some doomsday-sayers have propagated a myth of an unprecedented planetary alignment which will mark the end of the world, Susan Holtz, an instructor of astronomy, said no special planetary alignment will happen Dec. 21. She agreed that scientists knew of nothing special happening in the universe that should cause people to worry.

“Some folks are alarmed about a rough alignment of the Earth, Sun and Milky Way center, but that happens every year about the time of the solstice,” she said. “So, they should be alarmed every year. Some folks are alarmed about the Maya calendar ending, but that makes as much sense as being alarmed that your wall calendar needs to be replaced every 31st of December. NASA says there is nothing going on that does not always go on in the universe on the Winter Solstice this year.”