The group of students are dedicated to mitigating the effects of landfalling hurricanes on life and property. 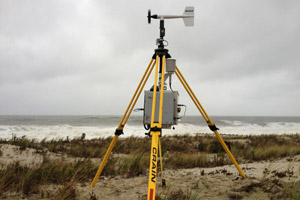 StickNet 0101A was the first probe lost by the team due to storm inundation.

It’s the off-season for researchers at the Texas Tech University Wind Science and Engineering Research Center (WiSE). The team is now busy installing upgrades to its arsenal of StickNet probes, and reflecting on a historic Atlantic hurricane season.

Rich Krupar, a doctoral student, has just concluded his second season as student field coordinator with the Texas Tech University Hurricane Research Team (TTUHRT), and given the improvements to its equipment, he is especially looking forward to next year. Krupar is at the forefront of hurricane research, which is not bad for a guy from Ohio.

It was as an undergrad at Valparaiso University that Krupar visited New Orleans with his track and field team in 2005. Together, they volunteered for cleanup following Hurricane Katrina, and witnessed the many lives shattered by the deadliest and most destructive Atlantic hurricane on record.

Seven years later, Krupar returned to the region during the first of two TTUHRT deployments for the 2012 season. This time, it was not for cleanup, but to gather data as Hurricane Isaac made landfall. The team utilized probes with both real-time telemetry, and those without.

“Our real-time observations were displayed on the big screen at the Mississippi Emergency Management Association (MEMA) state emergency operations center located at the Air National Guard Army Reserve Base in Gulfport, Miss.,” Krupar said. “The data was utilized to brief MEMA, army, police and even Governor Phil Bryant, all of whom were present through the event. It was great exposure, getting Texas Tech’s data to the people making the tough decisions.”

TTUHRT is dedicated to mitigating the effects of landfalling hurricanes on life and property. It is part of a quest for hurricane preparedness that residents of the Gulf Coast are accustomed to. Such was not the case two months later, when the team was deployed to intercept the 18th named storm of the season, as it ravaged the northeastern United States.

“Sandy was predicted well in advance by numerical model guidance, however there was uncertainty as to when and where it would make landfall,” Krupar said. “We wanted to obtain meaningful observations that would experience onshore flow along the coast to supplement our growing database, so we had to get the StickNets down as fast as we could, in as many strategic places as possible.”

The team’s primary objectives were to observe the wind maximum at landfall and the influence of the vertical wind profile on the surface wind field. It was a rigorous work schedule as they placed the probes up and down the Eastern Seaboard, while circumnavigating the traffic and the chaos of residential evacuations.

“They were concerned about one probe in particular, and they weighed their decision very heavily,” said John Schroeder, director of the Texas Tech Wind Science and Engineering Research Center. “What put it into perspective was when you considered the surroundings. If that StickNet is lost, so are all the homes around it.” 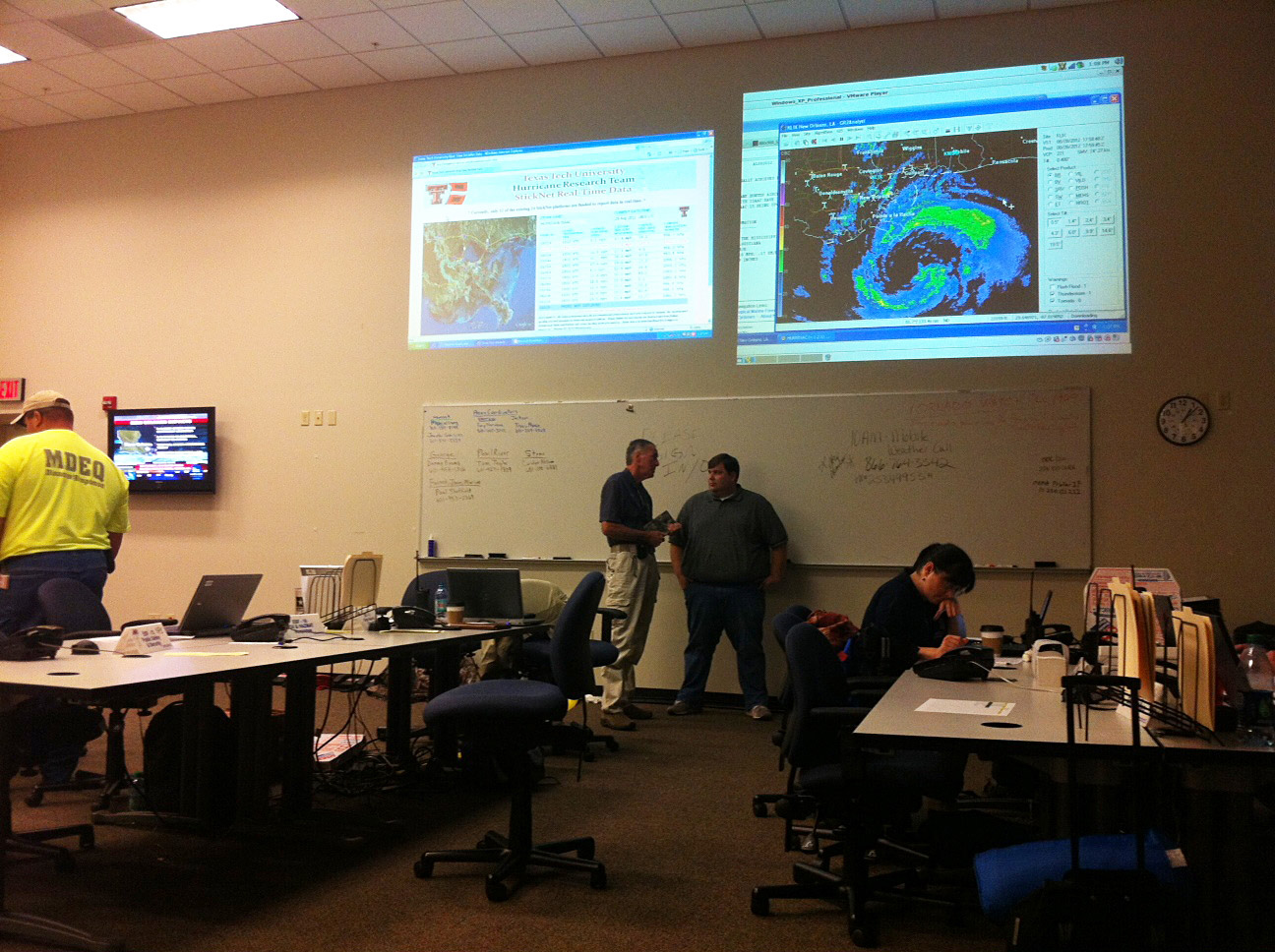 The real-time observations collected by Texas Tech were displayed on the big screen at the Mississippi Emergency Management Association (MEMA).

These probes all featured the real-time communications, which allowed data to be transmitted back to Lubbock via cellular network. From safety, the team watched the numbers come in, and they held their breath as data from StickNet 0101A failed to update. The only way to confirm the probe’s demise was to return to the site after the storm passed and investigate post-storm aerial photography. Krupar said it was the first probe lost due to storm inundation.

“I vividly remember us discussing over and over, the risk versus the reward. And we look back at the photos and wonder what we could have done better,” Krupar said. “The data received on the server was archived and so we now have a pretty good idea what was going on with the probe just before it failed.”

At 1,100 miles in diameter, Superstorm Sandy became the largest Atlantic hurricane on record, resulting in more than 250 deaths and up to $70 billion in damaged homes and infrastructure.

“There have been comparisons to the Perfect Storm (1991) which formed in part from Hurricane Grace, but Sandy made landfall in the Mid-Atlantic, while Grace scraped the New England area,” Krupar said. “Each storm is unique in its own way. I don’t know if in our lifetime we’ll ever see this happen again.”

A data summary of the 2012 deployments is now available at the TTUHRT web site.

Among the improvements currently underway for the 2013 season, real-time communications for all StickNet probes. The team encourages the public to follow them on Facebook for updates from the field.