Institute for the Study of Western Civilization Formed

The new institute is the only program of its kind among major U.S. universities. 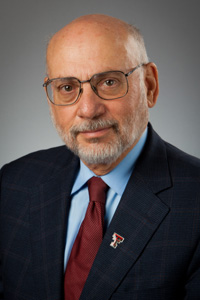 Officials at Texas Tech officially commemorated the launch of The Institute for the Study of Western Civilization at a showcase Oct. 11 in the Southwest Collections/Special Collections Library. The institute, the only program of its kind among major U.S. universities, aims to rekindle academic interest in the study of Western civilization’s extraordinary character.

The talk and reception will also introduce Stephen H. Balch, recipient of the President’s National Humanities medal and a leading authority on Western Civilization Studies, who will serve as the institute’s founding director. “I am thrilled to begin my new career at Texas Tech University,” Balch said. “Studying our civilization’s uniqueness has been dropping out of scholarly fashion. By establishing this institute, Texas Tech aims to restore the examination of the West’s Promethean, world-transforming, nature to its rightful place at the heart of the academic enterprise. This, by any account, is a bold move.”

As part of the Honors College, the Institute for the Study of Western Civilization will foster discussion and research on the nature, origins and future of the West, exploring topics such as the relationship between liberty, individualism and progress; the Judeo-Christian tradition; the West’s special compact with reason; American exceptionalism; and the West’s Utopian and revolutionary impulses.

The institute’s study of Western civilization will not only look at the great achievements, abundance, liberty and scientific knowledge of the West, but also its dark side, characterized by threats such as nuclear weapons, totalitarianism and degraded natural environments.

“A renewal of interest in Western civilization’s uniqueness is imperative if we’re to retain all the benefits and cope with the dangers it has produced,” Balch said. “The institute will allow students and scholars to enrich their understandings of how America, the West and the world, came to be what they are today, as well as promote recognition of the accomplishments of other civilizations and facilitate scholarly comparisons between them and the West.” The institute also will serve the larger academic community beyond Texas Tech through conferences, publications and the creation of online intellectual communities. Locally, the institute will offer presentations to community groups plus online resources and field seminars for Texas Tech alumni and others interested in the phenomenon of Western civilization.

“Texas Tech continues to be at the forefront of research and curriculum,” said Kent Hance, chancellor of the Texas Tech University System. “The Institute for the Study of Western Civilization is the first of its kind and will pave the way for expansion on this area of academic study. We are proud to have Dr. Balch on board and look forward to a bright future for the program.”

Balch holds a doctoral in political science from the University of California at Berkeley and served for 14 years on the faculty of the City University of New York. Before coming to Texas Tech, he served for 25 years as founding president and chairman of the National Association of Scholars (NAS), an organization of higher education professionals dedicated to the tradition and principles of liberal arts education.

During his years at NAS, Balch worked to encourage institutions of higher education across the nation to develop academic programming focused on Western civilization and the study of free institutions. He also played a major role in the founding of a variety of other academic organizations devoted to enriching scholarship and the public discussion of higher education issues.

Balch received the Jeane Kirkpatrick Academic Freedom Award in 2009, bestowed by the Lynde and Harry Bradley Foundation and the American Conservative Union Foundation. He also co-authored “The Vanishing West: 1964-2010,” a NAS study documenting the dramatic decline in the number of courses on the history of Western civilization in America’s universities and colleges.