About 560 journalists, expert speakers and others from around the globe descended on Lubbock. 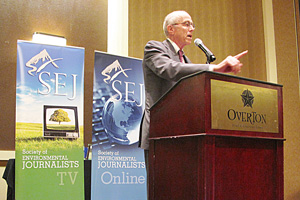 About 560 journalists, expert speakers and others from around the globe descended on Texas Tech to attend the 22nd Annual Society of Environmental Journalists (SEJ) Conference from Oct. 17-21.

“We developed and offered a very ambitious program agenda, featuring dozens of events during five days - eight if you count the post-conference tour to Big Bend,” said Beth Parke, executive director for the SEJ.

“The impact of this conference cannot be overstated. We had people there from 11 countries and 40 states. Conference results will be playing out for years to come in terms of all that was learned and how that will be applied in terms of journalism, business, advocacy and public communication of science politics – a wide range of fields.  It was exciting to me to see people from all over the world, sitting down and talking together, or in some cased visiting unusual locations of special interest that few might ever have a chance to see, learning and exchanging information and points of view.”

The SEJ is the only U.S.-based membership organization of working journalists dedicated to improvements in environmental reporting.

The annual conference brings together hundreds of journalists, scientists, educators, government officials, environmental advocates, business representatives and other leaders to explore the many facets of environmental stories. Randy Lee Loftis, environmental writer for the Dallas Morning News, served as the 2012 conference chairman.

During the event, Jill Tidman and Robert Redford’s son, Jamie, presented the film “Watershed.” The pair produced the film, which was shown on Oct. 16 in Lubbock as part of pre-conference events. Also, an Oct. 18 pre-screening of Ken Burns’ “The Dust Bowl” featured Dayton Duncan, a co-producer on the master documentarian’s latest piece. 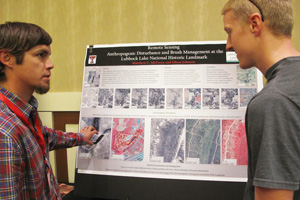 Texas Tech students also had the opportunity to share their research with the many journalists on hand.

Each year, the society chooses a distinguished research university to co-locate its conference. This year’s theme, “Big Land, Big Sky, Big Issues” covered topics such as Lubbock and the South Plains region, environmental toxicology, water use in an arid environment, oil and natural gas production, the cattle industry and the natural environment.

The event offered a great opportunity for Texas Tech and West Texas to showcase how the region contributes to the nation’s economy and considers land stewardship at the same time, said Lawrence Schovanec, interim president of Texas Tech.

“For four days, Texas Tech University, the city of Lubbock and the South Plains were the focal points of some of the leading environmental journalists across the country and abroad,” Schovanec said. “Dr. Ron Kendall, his staff and the staff of the SEJ are to be commended for providing and accommodating meaningful dialogue pertaining to issues facing our world. It will have a positive social and economic impact on our region from what these reporters learned about us. We are proud to have hosted such a venerable group.”

Throughout the event, Parke said members continued coming up to conference organizers remarking on the high level of information and education offered during various programs.

“We are surveying attendees right now, and they are telling us that they got tremendous value in terms of new contacts including sources for news stories, a deeper understanding of issues and story leads,” Parke said. “Some folks were surprised by how much they enjoyed Lubbock and the surrounding area. Folks were also eager to learn about water issues and the Ogallala Aquifer, to ask questions and make observations first hand on some of the tours. We were congratulated for having such a great conference and taking the group to a lesser known place, not another meeting in a predictable convention town. Quite a few said it was the best conference they’d ever attended.

“We cannot say enough about the contributions of Dr. Ron Kendall, without whom this conference would never have taken place. He gave critical, essential support to so many aspects of this project, from the very beginning, up to and throughout the thick of those last few months.”

More than 70 experts from Texas Tech University served on panels, discussions and field trips, Parke said. That number was more than any other institute that has hosted the conference in the past.

“We were thrilled by the level of enthusiasm and high-level contributions we got from so many of Texas Tech’s outstanding faculty and staff,” she said. “Your researchers had a lot to share and their presentations were very attractive. I could name many faculty members who served as speakers, and made simply outstanding contributions to the program. Dr. Katherine Hayhoe in particular was a sensation, and kind enough to speak on several sessions. Kelly Kaufhold from your school of Media and Communication worked with us to train and deploy a wonderful crew of students for the purpose of recording many sessions. The student poster session that presented their environmental research on Wednesday was perhaps the most successful we’ve ever had.

“We do hope to maintain relationships with a number of TTU people we had the opportunity to work with in this process.” 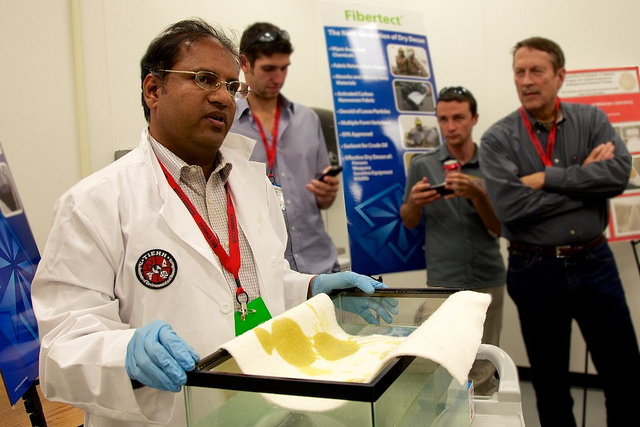 The conference also provided Texas Tech professors the opportunity to demonstrate their work, such as Seshadri Ramkumar's Fibertect.

Bringing the conference to Lubbock was the idea of Kendall, professor of environmental toxicology and special assistant to the president, Office of the President. After reading about a recent SEJ conference held at his alma mater, Virginia Tech, he said that he became intrigued with the possibilities of hosting a meeting at Texas Tech.

The process to bring the journalism organization to Lubbock took three years, he said.

“I found out previous meetings were at Stanford and the University of Wisconsin at Madison – both of which are top-tier universities,” Kendall said. “This was a huge coup for Lubbock to bring this kind of organization in so that we, as academics and as a campus, can interact and establish relationships with its members. After this, we’ll have extraordinary outlets with which to communicate about our community and university, and make aware, particularly to industry research sponsors, our capabilities at Texas Tech University.”

Kendall said he was pleased with the involvement with Texas Tech faculty and said the contacts made and education presented not only gave the world press a better idea about Texas Tech’s activities as an emerging research university, but also about how industries such as cotton, oil and gas, wind power and the cattle industries have worked to make their various commodities more environmentally sound.

“I’ve been told by many through the SEJ organization that we had a lot to offer and we proved it in terms of the environmental research we’re doing,” Kendall said. “This didn’t just involve the university. It also involved a lot of the important industries. We showed very well as a university, a city and as an entire region.”