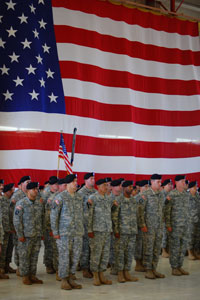 The center was established in 2004 because of the number of faculty members who had military background.

In 2004 Texas Tech University’s School of Law had a plethora of faculty members who, through various tours of duty and branches of service, had military background. The American Bar Association (ABA) accreditation team visiting the school at the time took notice and suggested the school set up some sort of military center of excellence.

In November 2004 the Texas Tech Law School’s Center for Military Law and Policy was born.

Walter Huffman, dean emeritus, current professor and retired Major General, U.S. Army, was dean of the school at the time.

“Their thinking, and mine as dean, was that because our Military Law and Policy Center would be the only one at any ABA-accredited law school, it would give us a niche area we could leverage in several ways to the benefit of Tech Law,” Huffman said.

Huffman described a number of benefits the center has brought to the Texas Tech School of Law. It has given the school visibility at the national level that has in turn led to invitations for the professors associated with the center to speak and present at prestigious conferences. It has led to center professors being interviewed by national media and quoted in national publications on matters concerning military law. The center has hosted seminars and individual presentations featuring distinguished speakers from other law schools and the federal government, thus enhancing both the reputation of the school and the student experience.

“The center has brought us some really high-quality students who are interested in military law,” Huffman said. “It has led to appointments for center professors to prestigious federal committees; and it has sponsored scholarship in the area of military law that has both helped shape the law and provided experience in this area for the students selected as research assistants for scholarly research and publication.”

Richard Rosen, retired Colonel, U.S. Army, and director of the center, agreed that one of the most visible features of the center is the ability to bring in high profile speakers and visiting scholars and to share those events with Tech Law Military Association (TLMA), the student organization interested in military law.

Rosen said the center has allowed the Texas Tech Law School to host several national security law symposia during the past few years.

“In 2011 we partnered with Texas Tech’s Philosophy Department and brought in some high-profile authorities for a conference on torture,” Rosen said.

Last August Secretary of Defense Leon Panetta appointed Huffman to the newly formed Defense Legal Policy Board, and Rosen was appointed to the military justice subcommittee. Rosen is a primary contact nationally for media regarding the Fort Hood shooting of Nov. 5, 2009, and the process for Nidal Hasan’s trial.

“Because the center does attract students to Tech Law who are interested in military law, and the center’s various seminars and speakers provide built-in events, you could say the center spawned our large and active Tech Law Military Association – a law student group that assists veterans and the community with various philanthropic projects as well as providing an organization that fosters the study of military law.”

Other current faculty members contributing to the body of military law knowledge include Brian Shannon, who was attorney-advisor in the Office of the General Counsel to the Secretary of the Air Force at the Pentagon; and John Watts, who served four years in the United States Marine Corps.

Current adjunct faculty members who were full-time professors and involved in the center include: Charles Bubany, Joseph Conboy and James Eissinger. Cal Lewis, former professor and associate dean also was vital to the center, as was the late Horn Professor Daniel Benson, who died in December 2011.

Now in his third year at the Texas Tech University School of Law, Austin Franklin already has worked internships at two military bases because of his involvement in the Tech Law Military Association (TLMA).

“I’ve been able to work internships at Fort Bliss and at Fort Sill because of my participation in this organization,” Franklin said.

The student group has about 20 to 30 dues-paying members, Franklin said, but when they bring in speakers the whole school is invited. The organizations’ mission comprises three elements – academics, service and social.

The two major benefits of membership are getting to know the veterans who are involved in the organization and participating in service projects like providing care packages to soldiers who are currently serving.

“If you’re really interested in getting into the JAG Corps, Texas Tech Law is the place you want to come,” Franklin said.

The Judge Advocate General’s (JAG) Corps is the legal branch or specialty of a military concerned with military justice and military law.