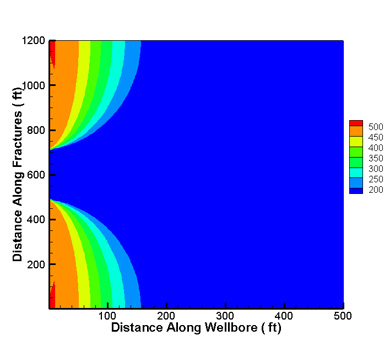 A fracture placement in zipper-frac design.

Global demand for underground resources, such as oil and natural gas, is forecast to climb significantly in the years to come. To keep up with increasing needs, well stimulation techniques such as hydraulic fracturing (or fracking) are becoming more and more important.

A team of Texas Tech University researchers has developed new techniques to enhance the process.

In recent years, new fracturing techniques have sought to enhance production of trapped hydrocarbons. Zipper frac, for example, is one of those techniques, which involves simultaneous stimulation of two parallel horizontal wells. In layman’s terms, fractures in each stage propagate toward each other, so the induced stresses at the tips would force fractures further and increase output.

Soliman and two graduate students in petroleum engineering, Mehdi Rafiee and Elias Pirayesh, suggest that while the zipper frac is being practiced by the industry, it does not fully account for the mechanical properties of the subterranean formation. The tips must be very close to observe the stress interference effect. In another technique (alternating fracturing), a great degree of complexity can be achieved by designing fractures in an alternative sequence (Texas Two Step). Although this one looks more promising, it is operationally difficult to practice.

“We have developed two new techniques – both are simpler, but more effective,” Rafiee said. “Multi laterals, same as zipper frac, different design and you create a more complex network.”

The new patent pending design is a modified zipper frac (MZF), where fractures are initiated in a staggered pattern to induce stress, not only at the tips, but also in the middle area between fractures. 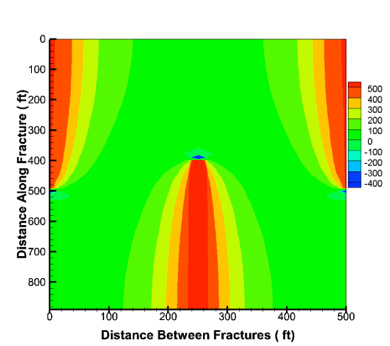 A fracture placement in MZF design.

“The modified zipper frac increases complexity in the reservoir,” Soliman said. “MZF achieves the goals that the zipper frac was supposed to achieve.”

A second patent has been filed to cover an optimization technique that maximizes production through variable spacing between hydraulic fractures. Fractures are not spread equally; instead, measurements are taken after the first fracture to determine placement of subsequent fractures.

“After the first stage, you perform the optimization technique,” said Rafiee. “You determine the distance based on the stress interference, the complexity you need and the predicted fracture propagation.”

The Office of Technology Commercialization at Texas Tech University has filed two patent applications to protect these methods and is actively engaging with oil and gas companies to begin using these improved rock fracturing techniques in the field.

“Dr. Soliman’s technique is another great example of the innovation taking place at Texas Tech. His process will help advance the energy industry, which is a key to the growth of our regional and national economy and it is likely to see significant growth over the next several decades,” said Jodey Arrington, Vice Chancellor for Research, Commercialization and Federal Relations at the System. “Texas Tech researchers are solving real problems and it’s our job to make sure these solutions don’t stay at Texas Tech, but get in to the marketplace where the benefit can be shared with the public.”

“This is a lot simpler to apply, however the prospective company will need people to design it,” Soliman said. “Not only do we have the technology, we have the pending patents, we have developed the software, and we have the people who can do it for them.”