The annual lighting of the campus can also serve as the perfect backdrop for engagements. 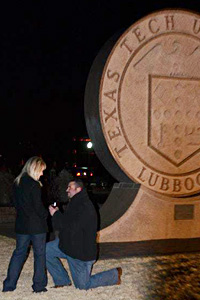 Bryce Bowley proposing to his then-girlfriend, Brittany, at last year's Carol of Lights. The two were married in July.

As Natalie and her boyfriend Ryan approached campus for the 52nd annual Carol of Lights in 2010, Ryan complained of recent knee injury. He was worried about standing for the entirety of the ceremony.

As the choir sang, hinting that the lighting was just moments away, Ryan turned to Natalie.

“Yes, I think so,” she answered, thinking he was asking if the lights were about to come on.

Ryan knelt on his hurt knee and opened a small box as the lights turned on, illuminating the Texas Tech campus along with the couple.

“He told me he loved me and asked me to be his wife,” Natalie said, remembering a night she will never forget. Natalie Corona graduated from Texas Tech in 2011 and her now-husband Ryan graduated in 2010. The Coronas wed this past summer in Lubbock, and the reception was held at the Frazier Alumni Pavilion.

For many couples, Carol of Lights serves as the perfect backdrop for an engagement. Red Raider students and alumni, as well as members of the Lubbock community have proposed and been proposed to at the ceremony. This year's ceremony begins at 6:30 Dec. 1 (Saturday).

“We love Texas Tech University, and the Carol of Lights tradition will always hold a special place in our hearts,” Natalie said.

The Coronas were not the only couple to be engaged in 2010. Shane Kammerer (’01) proposed to his now-wife Kathleen (’01) in 2010, more than ten years after they first met at Texas Tech in 1997. Shane popped the question at a local church, moments before the Carol of Lights ceremony began.

Click here to view a time-lapse video of the 2012 Carol of Lights event. 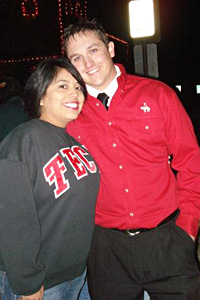 Marrisa and Seth Bell got engaged at the 2007 Carol of Lights.

“We plan on attending Carol of Lights this year with our nine-month-old daughter, Audrey, to celebrate the two-year anniversary of our engagement,” Kathleen said.

Marissa Bell was a single mother working two jobs and attending Texas Tech part-time in 2007 when her boyfriend Seth (’97) proposed. Seth was a Saddle Tramp and the two had been dating for only six months, so Marissa was taken by surprise when he popped the question.

“The evening came and just as usual the evening was wonderful,” Marissa said. “As Seth came to meet us I felt him shaking, I thought it was the cold weather. We went to take pictures under the tree, it was at this time that he got on one knee and asked me to marry him.”

Marissa now works at Texas Tech as the coordinator for Mentor Tech. She married Seth in March of 2008.

Just last year, Bryce Bowley (’06) proposed to his girlfriend, Brittany (’09, ’11), at Carol of Lights. The two were married in July and enjoy reflecting on the perfect setting for a Red Raider engagement.

“Finally it was our turn to take our picture,” Brittany said. “We posed for one, then Bryce turned to me and asked if he could give me an early Christmas present. I was confused as to why he would want to give it to me right at that moment. Then he got down on his knee, and asked me to marry him. At that moment, the thousands of people who were all around watching disappeared and it was just me and him in that moment. Never in my life have I had such a perfect feeling. Tears in both of our eyes, I said yes, and like that, I became the future Mrs. Bowley! He could not have chosen a more perfect place or a more perfect time.”