Organization president: 'In simplest terms, these awards mean that what we have built is the best of the best.' 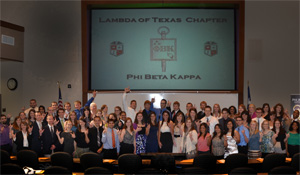 The two awards were given through separate selection committees and processes. Each award is accompanied by a certificate of achievement and a $1,000 cash stipend.

“These outstanding rankings exemplify the quality and character of Phi Beta Kappa in our region,” said Interim President Lawrence Schovanec. “The chapter and the West Texas-Eastern New Mexico association’s passion and dedication to academics are apparent through both organizations’ hard work and numerous achievements that have promoted student success.”

Phi Beta Kappa’s Triennial Council presents these awards every three years, said Mary Jane Hurst, current president of the West Texas-Eastern New Mexico association and founding president of Texas Tech’s chapter. For either the university chapter or the regional association to have been selected as the national best would be remarkable. For both Phi Beta Kappa organizations to earn best in the nation – and at the same time through different review processes – is extraordinary.

Best of the Best

“In simplest terms, these awards mean that what we have built is the best of the best,” she said. “These awards affirm our hard work and dedicated efforts over many years. More fundamentally, these awards encourage us to continue to excel as we promote the core values of Phi Beta Kappa: honor and integrity; freedom of expression; and a confidence in the truth and beauty of science, literature, language, mathematics and all the fields of pure intellectual endeavor.” 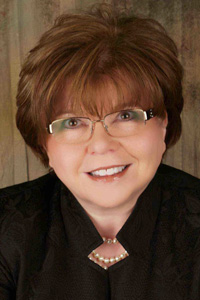 The award for Best Chapter, which went to Texas Tech’s Lambda of Texas, specifically covered the period of 2008, 2009 and 2010. The award process considered such features as the variety of campus programs and activities sponsored by Phi Beta Kappa, the impact of Phi Beta Kappa on the liberal arts and sciences and on the campus as a whole and the percentage of membership invitations extended to students who were accepted.

The award was accepted by Marc Lochbaum, current president of the chapter and professor in the Department of Health, Exercise, & Sport Science.

The award for Best Association was given for such features as the variety of programs, activities and scholarships sponsored as well as the impact of the association on the community. The award was accepted by Mary Jane Hurst.

Though no dates for the association award were specified during the presentation of awards, the West Texas - Eastern New Mexico chapter was chartered in 1997, and its presidents have included (in chronological order) Rob Posteraro (Radiology/HSC); Mary Jane Hurst; Quitevis; Alice White (Admissions); Chris Bradley (Chemistry); and Mary Jane Hurst. 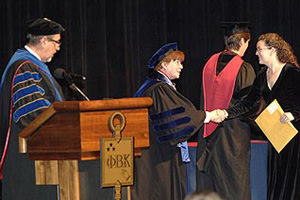 Texas Tech is one of only three Texas public universities that has been granted the right to shelter a chapter of Phi Beta Kappa.

“The Society is delighted to recognize the West Texas-Eastern New Mexico Association and the Texas Tech Chapter for their hard work and remarkable commitment to advancing the ideals of Phi Beta Kappa, both on campus and in the broader world,” said John Churchill, secretary and CEO of Phi Beta Kappa.

In celebration of these awards, the Phi Beta Kappa Association will sponsor an event at 4 p.m. Oct. 7 during its annual meeting at the International Cultural Center. Provost Bob Smith will be the headline speaker.

Only three public universities in Texas have been granted the right to shelter a chapter of Phi Beta Kappa. Texas Tech’s chapter was approved in 2006 and installed in 2007.

Phi Beta Kappa was founded in 1776 and is the nation’s oldest and most prestigious honor society.  The Phi Beta Kappa Society has chartered only 283 chapters and 56 alumni associations.  Only 10 percent of the nation’s colleges and universities have been approved to shelter chapters, and at those institutions no more than ten percent of the students with a strong liberal arts and sciences background may be elected to lifetime membership in the society.  More information about Phi Beta Kappa is available at www.pbk.org.