Teaching assistants learn how theatre techniques can lead to greater authority and presence in classroom. 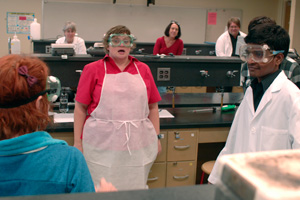 After a long night of drinking, she broke the rules and slugged some water as she and her partner prepared for an experiment in the chemistry lab.

Another student refused to put on her safety goggles. Later on, carelessness caused a fire at one of the other lab benches.

It sounds like a classroom nightmare, but thankfully it was all a drill and a teaching experiment unto itself. In this learning experiment, run by a new partnership between the Department of Theatre and Dance and the Department of Chemistry & Biochemistry, chemistry teaching assistants tasked with instructing undergraduate lab sections spent the day taking acting lessons and learning how theatre techniques can help to increase overall lab safety.

“Today, we are working with chemistry students to give them some tools with their voice and body that can allow them to have greater authority and presence in a classroom,” said Elizabeth Stromsness, a third-year master’s student in the theater department.

The eight-hour day fittingly began in the Laboratory Theatre with an hour of theatre games to warm up the students and prepare them for interaction – a prospect that Dominick Casadonte, Piper Professor of Chemistry, readily admits most of the teaching assistants met with some level of skepticism. Students then learned about body and movement, vocal work and status transactions, or how one announces one’s dominance or submission through body language.

“I think art and science are both tied together,” Casadonte said. “We made the point. I said, ‘Why do you think this is called a lab theatre? This is where the theatre students come to create new works. This is where they perform their cutting-edge stuff. It’s just like when you create new compounds in the lab. Both are tied together by this notion of creativity, and I think that resonated with the students.”

Then it was over to the chemistry labs to see how the teaching assistants would react to simulated problems involving trained actors playing unruly students to the hilt.

Linda Donahue, an associate professor and associate chairwoman of the theater department, said she and Casadonte had discussed the possibility of pairing theatre and chemistry in some way for years. The two spoke with Carol Korzeniewski, chairwoman of the chemistry department, who had experienced a similar scenario coordinated by the chemistry organization COACh facilitated by a group from  Harvard’s Kennedy School of Management, and the three decided to try to implement a similar program at Texas Tech. 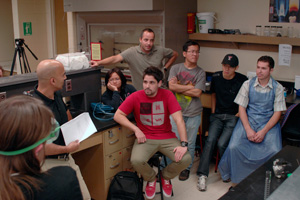 Last spring, students spent an hour and a half a week for six weeks learning similar theater techniques. This fall, the teaching assistants were fully immersed in a day-long program, Donahue said.

“Dominick and I had been mulling over different projects where theatre and chemistry came together,” Donahue said. “This seemed like a perfect fit for both departments. Carol mentioned she had similar training at a chemistry conference, and she uses it almost every day in her professional life. Our theatre graduate students are using theatre techniques for the chemistry TAs to use as they conduct labs. They learn about how to use your voice and how to have a commanding voice.  They learned physical work also, a lot of body positions, movement and then we did something called status transaction.  We help the students learn how to use high-status or low-status body posturing depending on the safety issue."

As she stepped into the world of live performance for the first time, Korzeniewski remembered the same uncomfortable feeling that many of the teaching assistants experienced in the beginning. But just like them, she and the other chemistry professors participating in the activity let go of their inhibitions and learned from the process.

“My initial thought was ‘this makes you feel dumb,’ ” she said. “You feel very uncomfortable at first. The theatre people really draw you out, however. I was participating with my peers in chemistry and after a few minutes you become a little more comfortable, because everyone is doing it. Subsequently, I realized these were skills you could use every day. I very often think back to that training and utilize the skills taught.”

Working Together to Stay Safe

Using 16 different safety scenarios, organizers in chemistry drafted departmental responses to each one, such as fire, chemical spills or handling horsing around. Actors from the theatre department would portray the scenarios, stopping at the crucial moment when teaching assistants would have to make a critical decision. The teaching assistants would discuss what they should do, and then be inserted into the restarted scene to handle the situation with safety as the ultimate outcome.

Sometimes, the teaching assistants had to be commanding and take control of a situation. Other times, they had to be soothing in a tense situation to keep the class under control. 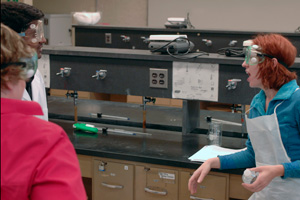 Using 16 different safety scenarios, organizers in chemistry drafted departmental responses to each one, such as fire, chemical spills or handling horsing around.

While some may not realize it, Casadonte said, teaching has an element of performance to it.

“It’s not just enough to know how to respond to emergency training,” Casadonte said. “If you’re standing in front of a group of people and trying to transmit knowledge, there is a certain amount of performance to that transmission. That’s how these theater skills are relevant to teaching. It was very neat to see how our graduate students were somewhat skeptical when they first came in and did this and by the end how wildly enthusiastic they were. Some came up to me afterward and said, ‘I didn’t realize what I would do with this situation until I was actually in the situation.’  Doing it with trained actors who were really acting the scene is more effective than a bunch of TAs just muddling through with role playing.”

Chemistry teaching assistant and graduate student Divya Ayier said that though the scenes were staged, she got a better feeling for how she should react to a real-life encounter.

“I learned how the tone and the way you speak, whether you should be a high standard or a low standard, all those things make a big impact when you're teaching,” Ayier said. "The safety training is important because we have a lot of theoretical knowledge about what has to be done in a crisis situation, but with the theater people actually doing the acting I realized it is so much harder.  When I was asked to act with these people in the actual scenario, I found that it was difficult to think on the spot and take quick action. I thought it would be like some kind of a drama going on and we would be the audience.  But it was actually the other way around.  We were taking part in the whole thing and there was total interaction with the theater people."