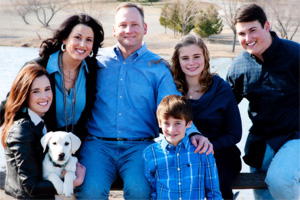 Karen Mayfield Price now lives in Amarillo with her husband. They have four children.

Karen Mayfield Price was crowned Homecoming Queen of Texas Tech in 1984 and graduated in 1986. After college, she was a television anchor/medical reporter for several years. Now she spends her time living in Amarillo with her husband and taking care of two of her four children. Her second-to-oldest child currently is a student at Texas Tech.

Being named Texas Tech Homecoming Queen was such a huge honor. Having the honor to represent our university was just incredible. When I came to Texas Tech I knew one person. I had no idea I was going to win and told my parents not to worry about coming. As a matter of fact, when they called my name, my escort had to tell me and nudge me forward.

I’m not sure what qualified me to be a candidate. I was first honored that my sorority, Chi Omega wanted me to represent them. I was involved in several volunteer projects at that time. I also headed up a program called Raider Recruiter. We worked in conjunction with coaches and the Saddle Tramps to promote Texas Tech for athletes. I was a calendar girl, called “Girls of Texas Tech”…not one of those calendars. I also represented my sorority and was runner up for Maid of Cotton. 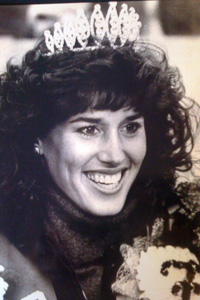 The top-grossing movie in 1984 was "Ghostbusters," and the top song was "When Doves Cry," by Prince.

I have such fond memories of my years at Texas Tech. One fond memory I have from being crowned was when I was able to represent Texas Tech at the Southwest Conference Cotton Bowl Classic. Every Southwest Conference School had its homecoming queen present. There were several events to talk up my great university, which I did proudly. We were also in a nationally televised parade, and even though Texas Tech was not playing in that game, the Heisman Trophy winner was Doug Flutie. I even boasted to Mr. Flutie what a great university Texas Tech is!

All I can say is BIG EVERYTHING! Big curly hair, big shoulder pads, big make up, big color...let’s just say I hope fashion does not repeat itself. Of course music was all about Madonna and Michael Jackson. I remember watching the first “Thriller” video in the Student Union Building. Technology was prehistoric compared to today. We really used the library in those days.

What is it like having a son attend Texas Tech?

I’m so glad my son attends Texas Tech. As I sat in freshman orientation last year I was flooded with so many memories. I know my son was so sick of hearing me say, “Oh my gosh, when I was here...,” but I get to come to Texas Tech as often as I can. I’m sure it’s more than my son would like, but it brings back such good memories.

Looking back on your memories of Texas Tech, what stands out to you?

Texas Tech means more to me than just the great university it is. I was headed to University of Southern California my high school senior year, until one of my friends headed to Texas Tech to play basketball. I decided to check out the school at the last minute. I fell in love with not only Texas Tech, but the State of Texas.