They have spent 10 weeks working as part of the Research Experiences for Undergraduates Site Program. 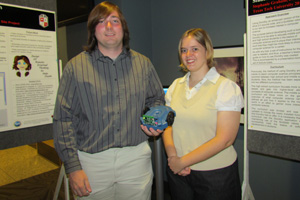 From robotics to smart grid security, 10 students from Texas Tech and universities across the country have spent the past 10 weeks working on a variety of topics as part of the National Science Foundation (NSF) Research Experiences for Undergraduates Site Program.

This is the final year of Texas Tech’s three-year grant from NSF that brings undergraduate students to campus to participate in ongoing research programs.

“The students go through the research process, from the literature review to designing their project to presenting their results,” said Susan Urban, professor in the Department of Industrial Engineering and principal investigator on the grant. “Our NSF grant allows us to expose undergraduates to the research process in a short period of time, and hopefully, this experience encourages the students to go on to graduate school.”

As part of the program, the students have been paired with a faculty mentor as well as a graduate student to assist them through the research process. They also took part in numerous professional development seminars covering topics such as applying to graduate school and ethics in research.

For Charles Baker, this is his second summer in the program. Last year was his first experience with research. Now he has his sights set on a graduate degree from Texas Tech.

“I was able to continue last summer’s research project into the fall,” said Baker. “I wrote a paper that was accepted by an international conference on software security and reliability. I was able to go to the conference in Washington, D.C., and present the paper.”

For some students, the 10-week program also was a lesson in collaboration and building on one another’s work. 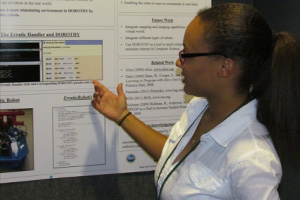 Sabyne Peeler, a senior from Florida A&M University, is one of the 10 students who participated in the program.

“DOROTHY is a simple drag-and-drop interface that allows students to program robots with sound, lights and movement,” he said. “My goal was to make an easy application so that young students would not be intimidated by complicated programming.”

“We have the imaging and mapping capabilities to use a type of robot called the Erratic robot to show students real-life applications of computer science,” said Peeler. “It’s a next step to demonstrate what real robots are capable of and what types of robots students might actually work with.”

The students and their projects are: