The grant will help develop the next generation of solid-state high-energy lasers. 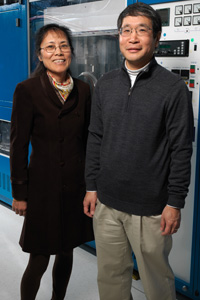 The project aims to advance the development of nano-scale, chip-size materials that could lead to the creation of significantly more compact and more powerful lasers for use by the military in missile defense systems.

“If we can create new materials to make these lasers smaller and more powerful, then a lot of new applications become possible,” Jiang said.

“We are working with the same materials in our laser project that we have been researching all along,” said Lin. “We are just expanding our work to high-energy lasers. It is all focused around making smaller, more compact, more energy-efficient materials that have practical military and consumer uses.”

It is the focus on the real-world application of their basic research that draws praise from their college dean. “Drs. Jiang and Lin have one of the best nanophotonic research groups in the country, and this grant will allow them to move their research forward,” said Al Sacco, dean of the Whitacre College of Engineering. “While they are conducting fundamental research, they also are looking for commercial applications that could spur the economy in Texas and in the country.”

“We are most appreciative of the support we have received from Dean Sacco, Taylor Eighmy, senior vice president for research and the university in acquiring this grant so that we can continue to move our research forward,” said Jiang.

Jiang and Lin came to Texas Tech in 2008 to establish the Nanophotonics Center, and research solid-state lighting technology and devices that emit both visible and ultraviolet light. Because their research focuses on nano-scale materials, there is a potential to create smaller, more cost-effective and more energy-efficient lighting sources and technologies.

The solid-state lighting technologies under development at the Nanophotonics Center will lead to energy efficient lighting. Additionally, Jiang and Lin’s research could aid the development of miniature displays in helmet-mounted or head-up display systems of aircraft pilots and on-deck air controllers. New display technologies will reduce weight and energy usage while offering real-time information processing and increased shock resistance, thus improving the quality of information received by the military.

“Currently, very large machines are used at shipping ports to scan large crates coming off of ships for nuclear materials,” said Lin. “Our work could possibly reduce the size of those scanners so that they could be handheld, making it easier and less expensive to scan more cargo.”

Jiang and Lin’s work has led to more than 20 patents on related (Ill-Nitride) semiconductor device technologies. The design and fabrication of these novel devices are
among the most prominent technologies for energy-efficient solid-state lighting and have been adopted by the light-emitting diode (LED) industry worldwide.

Back To School Fiesta Prepares Students for School Year