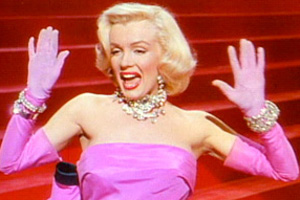 Even 50 years after her death, Monroe's face continues to grace the cover of magazines, clothing and accessories.

Platinum blonde, bright red lipstick and a white dress… you don’t have to step on a subway grate to catch wind that this description belongs to Marilyn Monroe. Today (Aug. 5) marks the 50th anniversary of her passing and Texas Tech University pop culture expert, Rob Weiner, reflects on why her image has transcended generations.

“Like James Dean, Marilyn Monroe is larger in death than in life,” Weiner said. “Her presence and her name are legendary.”

The iconic superstar was found dead at the age of 36, inside her Los Angeles home. She was naked, face down on her bed, still clutching a telephone. Her death remains a Hollywood mystery that only has grown stronger with time.

“She died under cryptic circumstances,” Weiner said. “Like ‘Superman’ George Reeves and President John F. Kennedy, there is much debate in which conspiracy theories abound.”

The intrigue, however, began early in life.

From a childhood in and out of foster homes, to a series of failed marriages and relationships, Monroe’s insatiable desire to be loved is something with which many people can identify. She also yearned to become something more than she already was.

“What grips us as a culture is not just her looks, but her status as an actress and the interesting life she led,” Weiner said. 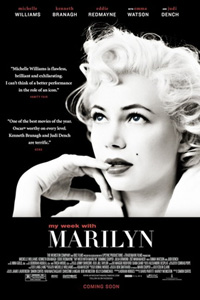 Monroe acted alongside big names like Cary Grant and Clark Gable, and worked with directors like Laurence Olivier and Billy Wilder.

“Regardless of whether one thinks she was a good actress or not, her movies stand up,” Weiner said. “She always held command of the camera. It was hard not to love her on screen.”

Monroe’s untimely death left the image of a tortured soul mixed with youth and glamour. It may also be a driving force behind her marketing.
“She represented what a star should look and act like, however fanciful that may be compared to her personal life,” Weiner said. “Her image is one of the most iconic in the history of popular culture.”

Even 50 years later, her face continues to grace the cover of magazines, clothing and accessories. New analyses of her life and death are published regularly, also television and film bear her likeness.

“The film showed a more realistic side of Marilyn,” Weiner said. “Williams’ performance provided a nice balance between charm and reality.”

And the same can be said for the small screen.

The 2012 television series “Smash” depicts a cast preparing for an ambitious Broadway musical based on the life of Marilyn Monroe. According to Weiner, its success and popularity is indicative of her pop-culture icon status.

“Anything associated with Marilyn Monroe is bound to be worth its weight in gold,” Weiner said.

An interesting analogy, considering the super-sized tribute to the blonde bombshell by artist Seward Johnson. His statue, “Forever Marilyn,” currently resides in Palm Springs, Calif. after it was moved from Chicago. It stands 26-feet tall and weighs 34,000 pounds.