Schwilk said his research doesn't prove climate change isn't happening or having effects; he just wanted to have people be more explicit about describing the mechanisms and causes of plant shifts.

However, the mechanisms explaining species-specific responses to changes in temperature and water availability are most likely much more complex, according to researchers at Texas Tech University and the United States Geological Survey. After reexamining an upslope vegetation shift reported in a high-profile 2008 study published in Proceedings of the National Academy of Sciences, the pair refuted the findings that plants are moving upslope in California because of climate warming by studying one particular desert shrub.

In a study published in the journal, PLoS ONE, Texas Tech ecologist Dylan Schwilk and USGS fire ecologist Jon Keeley reexamined a climate-driven vegetation shift at the Golden State’s Santa Rosa Mountains. Schwilk said he was initially suspicious of the 2008 findings after they suggested that one species, a shrub called desert ceanothus, was one of nine that were moving upslope because of global climate change.

“I want to be clear that I’m not saying climate change isn’t happening or having effects,” Schwilk said. “I study it all the time. But we’re trying to have people be more explicit about describing the mechanisms and causes of plant shifts, because I suspect there may be a bias toward automatically assuming climate change as the reason.”

Questioning the Past Research

Schwilk said the 2008 study looked at the shifting of 10 species during a 30-year period. Pulling 10 species from a 1977 botanical survey of the region, this study linked upslope movement of species to about a 2 F-degree increase in average temperature. The 2008 study reported that nine of these species had an average distribution about 50 meters higher in 2007 than in 1977. The researchers inferred that the desert ceanothus at the bottom of the hillsides were dying off, whereas those at the top were expanding.

That didn’t sit right with Schwilk and Keeley, who had studied this plant, known scientifically as Ceanothus greggii, before.

“We didn’t believe they’re driven that high up by the 30-year temperature increase,” he said. “They’re a desert plant. Certainly water is important to them, but I didn’t think the recorded temperature increase was going to cause that much of a shift. And as for water, rainfall had actually increased during that period of time. Also, because this species only establishes a fire, and none had been reported, we would not expect any new plants establishing if there had not been fire.” 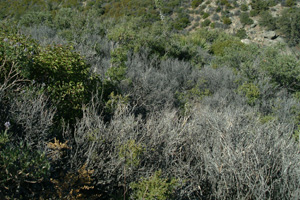 Schwilk said the 2008 study was unreplicated. Researchers had measured plant cover by species at a set of slope-parallel transects, but they only had one transect per elevation – each 120 meters apart in elevation in a line from desert to pine forest. Anything that differed at an elevation for any reason, such as site history or soil, could cause sites to differ in cover. There was also an issue that disturbance history could vary in a biased way with elevation due to differences in land use and fire ignition.

Models tested showed that any apparent increase in the elevation of desert ceanothus was more likely due to past fires than to either temperature changes or drought.

Schwilk said communities of these plants establish only after a fire. No fires in the past 30 years had been reported, so the next step was to study and age the plants themselves.

When a stand of these plants grows after fire, they leave tell-tale clues of when they were first established. By counting the stem ages of the dead plants, they can plot the mortality rate back to the stand’s establishment.

The 2008 study failed to take into account the natural life cycle of the desert ceanothus, Schwilk said. For the first 45 years after a stand is established, plant mortality rises, peaks and then declines. What the researchers thought was die-off due to climate change at the bottom of the hillside was actually natural attrition in younger ceanothus stands. The stands at the top of the hillside were actually older, more established and experiencing fewer plant deaths during the 1977 to 2007 period.

“We focused on one species because the life history of that plant allows us to establish a historical record of mortality rates,” he said. “If the stand is self-thinning, mortality should look like a hump-shaped curve as time passes. That’s exactly what we see here. We tested multiple hypotheses, and we found that it’s actually fire history and self-thinning at play, not global warming. Showing that the sites were of different ages throws into question the conclusion for all of their species, because the species occur at the same set of sites. In other words, their species are in no way independent replicated tests of vegetation shift.”