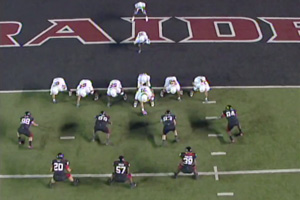 A novelty just few years ago, views provided by the skycam have seemingly become a must for major live events.

The rate of change in entertainment technology keeps getting faster and faster. For decades there was little change in the television home viewing experience. People had their 26-inch cathode ray television – and that was a big screen, the high end of what one could get. Now people buy big screens, flat screens, 3D televisions, and immerse themselves in surround sound in the living room.

For sports broadcasters as well, new technology means new ways to keep fans interested and engaged in the games, and a Texas Tech researcher is figuring out how the latest gadget plays into … the plays.

“We’re seeing more and more of this technology creep into living rooms,” Cummins said, “and I think broadcasters are recognizing these changes in the viewing experience, and trying to come up with ways to capitalize on them.”

Cummins said this particular avenue of research comes from a broader interest in viewers’ immersion in the on-screen experience.

“Televisions are getting bigger, and what that technology does is, it kind of draws you into the broadcast a little bit,” he said. “So as I was interested in that subject, I started noticing there was this particular camera angle starting to show up more and more in sports – it’s this overhead subjective camera perspective of game play, where you see the game unfold from an overhead, or quarterback’s point of view, sometimes.”

Sometimes fans have seen other novel camera techniques like a helmet cam – where the camera might actually be mounted inside a player’s helmet. Again, the purpose of these techniques, Cummins said, is to make one see the action from that unique perspective, as though the viewer is there on the field. The end result of that is again, a sense of engagement, a sense of spatial immersion in that environment seen on the screen.

Cummins’ first study was a simple paper and pencil responses to the gameplay, asking whether the respondents felt immersed in the broadcast, whether they found the overhead subjective camera perspective exciting.

The second study was in the psychophysiology labs. Cummins brought people in, used equipment that was able to measure their physiological responses to gameplay, and see what happened in terms of that bodily reaction to gameplay – to see if it was arousing, to see if their body was saying the same thing that their self-report data was saying.

He expected to find that the skycam perspective would be more exciting.

“What was interesting was what their body told us. The self-report told us one thing, but the physiological responses weren’t quite in agreement.” 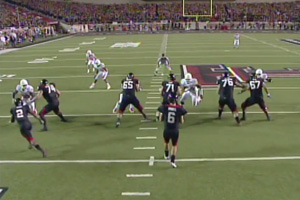 The idea behind the overhead subjective camera is to immerse fans into the action on the field, sometimes even them offering them the quarterback's perspective.

“The whole time they’re seeing this perspective where they’re being zipped along the field and jerked from right to left, every time that happens, there’s a tiny little arousal response.”

“Those tiny little arousal responses serve to elevate your baseline level of arousal,” he said. “So you’re not sitting at a zero, you’re sitting at a 2, a 3 or a 4. You kind of maintain your level of arousal with gameplay, so that when the big play does happen, you’re not starting from scratch. You’re starting from some elevated level already. That’s when our research becomes really interesting is when what you self-report – what you say is happening – is a little different from what your body is actually doing while you’re watching game play.”

Keeping Up with the Times

The skycam itself is useful for broadcasters because there are so many things they can’t control. What they can control are the technological bells and whistles they put on top of a broadcast.

Cummins said broadcasters can strategically employ techniques like the overhead subjective camera and other types of visual and audio techniques on top of sportscasts to make them seem more exciting, to give the viewer something to make the game more interesting throughout the competition.

Cummins said, looking at the history of sports broadcasting, there actually were changes over time. A lot of people talked about how television changed sports, how sports changed television – the symbiotic relationship between television and sports. This is something that has had a lot of attention in scholarly literature for the past few decades.