Texas Tech film experts Rob Weiner and Robert Moses Peaslee have teamed up as editors of a new book. 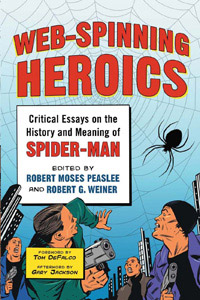 “The Amazing Spider-Man” already has fans caught in his web. After the midnight opening on July 4, the film grossed more than $7.5 million, and approximately $35 million in its first full day. Critics were initially concerned about a reboot so soon after the trilogy. The response, however, has been overwhelmingly positive, and fans have discovered there is more to Spider-Man than meets the eye.

This comes as no surprise to Texas Tech University film experts Rob Weiner and Robert Moses Peaslee, assistant professor in the College of Mass Communications. The pair has teamed up as editors of a new book, “Web-Spinning Heroics: Critical Essays on the History and Meaning of Spider-Man.”

This volume collects a wide-ranging sample of fresh analyses of Spider-Man. It traverses boundaries of medium, genre, epistemology and discipline in essays that advance the study of one of comic’s most beloved characters.

“This collection looks at the various facets of the culture that is Spider-Man, from gaming to the animated series, from gender to race, and even music and urban analysis,” Weiner said. “We also look at Spider-Man with regard to journalism, given Peter Parker’s profession.”

The book examines all things Spider-Man, from the controversy of his  origins, to the villains, and even his evolution from the star of a graphic novel to Broadway,” said Peaslee. “This book was crafted for fans, creators and academics alike.”

There are many aspects to Peter Parker’s history that remain relatively unexplored, Weiner said. The book points out the highlights and answers many questions, and yet - invites readers to explore their own interpretations.

“Web-Spinning Heroics: Critical Essays on the History and Meaning of Spider-Man” is available at online book sellers, such as Amazon and McFarland Books.