The non-denominational, multifunction chapel is officially open for use. 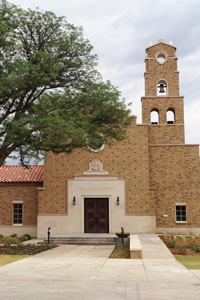 The Hance Chapel can seat approximately 250 guests and is available to all faiths.

Officials at Texas Tech today (June 6) announced the completion of the Kent R. Hance Chapel, a more than $3.5 million project.

The project was funded through private gifts from many donors, including David Arrington, the late Margaret Talkington and Kent Hance, chancellor of the Texas Tech University System and lead contributor to the chapel.

Hance and supporters commemorated the milestone with an official dedication and ribbon-cutting ceremony.

“The new chapel is a wonderful addition to our university,” Hance said. “Not only is this going to be a special place for so many of our students, alumni and friends to enjoy, it also serves as a beautiful cornerstone to the Texas Tech campus.”

Located off 17th Street and University Avenu,e near the McKenzie-Merket Alumni Center, the non-denominational, multifunction chapel is officially open for use and supports a broad range of religious and non-religious services, such as weddings, funerals, memorial services and other events.

The Hance Chapel can seat approximately 250 guests and is available to all faiths.  Complementing the Spanish Renaissance architecture style established on campus, the 6,879-square-foot facility features a prominent bell tower, 14 colorful stained glass windows and an outdoor courtyard area south of the building. Other amenities include pendulant lighting, separate bridal and groom suites and a gold-tinted accent wall.

The project was approved by the Board of Regents in February 2011 and construction of the facility began in May 2011. Revenues generated by the chapel as well as an endowment set up by private donors will be used to sustain operations. No taxpayer money was used to construct the chapel.