Lance Nail comes to campus after serving as dean of the business school at the University of Southern Mississippi. 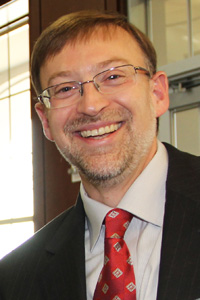 Among his accomplishments at USM, Nail restructured the college's internal and external relations, increased private giving, and directed a revamping of the college's graduate and undergraduate curricula.

“Dr. Nail is a dedicated and proven administrator and leads with a high level of energy,” said Bob Smith, Texas Tech provost. “His background, experience and notable record of accomplishments will all be tremendous assets to the Rawls College and we are excited to place the college in his hands.”

Among his accomplishments during his nearly four years as dean at USM, Nail restructured the college’s internal and external relations, increased private giving, and directed a revamping of the college’s undergraduate and graduate curricula. Additionally, he implemented a five-year strategic plan, which included the construction of a new building for the college, which the university broke ground on in May.

“Obviously, I’m honored to serve in this role,” Nail said. “The Rawls College is a gem and that’s what attracted me. As I began conducting research on the position, I had no idea how many great faculty are in the college. I’m not sure everyone outside of Texas Tech knows how strong that faculty is. When I visited, I noticed the morale and collegiality of the faculty and staff, which lend to a very positive environment where everyone is working together with a common mission of advancing business knowledge and education.”

Nail’s commitment to faculty and students at USM was evident in his successfully recruiting and hiring new senior leadership to mentor junior faculty and increasing faculty support from private funds with the addition of two endowed professorships and faculty development funds. Student support was enhanced with nearly $200,000 in new scholarship funding and a creation of a new student success center.

“As we move forward in our journey to become a high-quality national research university, individuals like Dr. Nail are essential in achieving our goals,” said Guy Bailey, Texas Tech president. “His exceptional record as a faculty member and administrator is matched by his innovativeness and creativity in directing a college. Texas Tech is fortunate to have Dr. Nail on board.”

A 1989 graduate from the University of Alabama, Nail finished first in his class and received a Bachelor of Science degree in finance with a minor in economics. Following three years as a consultant with Ernst & Young LLP, Nail earned his Ph.D. in finance at the University of Georgia in 1996. He is currently in his sixth and final year serving as the editor of the Elsevier journal International Review of Financial Analysis.

Nail replaces Allen McInnes, who served as dean for 10 years. The college grew exponentially under his leadership as evidenced by a gradual increase in enrollment and the new $70-million, state-of-the-art Rawls College of Business building.