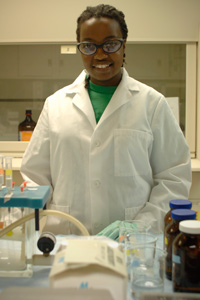 Kinyua's research found that people in Lubbock used 900 grams of cocaine during an average weekday, but increase their usage by up to 1,200 grams on weekends.

That’s what a master’s student with Texas Tech's Institute for Forensic Science discovered after testing sewage water headed for the Lubbock Wastewater Treatment Plant. She reported her findings in the peer-reviewed Journal of Forensic Science.

Juliet Kinyua, now a doctoral student at The Institute of Environmental and Human Health (TIEHH) from Kenya, studied Lubbock sewer water as part of her master’s research project. She found that, on average, people in the city used 900 grams of cocaine during an average weekday, but increase their usage by up to 1,200 grams on weekends.

Kinyua worked under the supervision of Kathy Sperry, senior director for the Institute of Forensic Science, and Todd Anderson, a professor of environmental toxicology at TIEHH. To test the water coming into the treatment facility, she used a process called sewage epidemiology.

About five years old, the system is more commonly used in Europe to pinpoint neighborhoods where residents use high amounts of illegal drugs as well as what kinds of drugs are being abused. Kinyua then used gas chromatography-mass spectrometry to test for a chemical product created when humans metabolize cocaine.

“We didn’t know what to expect,” she said, explaining her thoughts prior to the study. “We wanted to see weekly variations on cocaine use. We collected wastewater on Mondays and Fridays. Mondays were representative of the weekends whereas Fridays were more representative of use during the week.”

When a human ingests cocaine, 45 percent of the amount is turned into a metabolite called benzoylecgonine, or BE, Kinyua said. The chemical is only produced when humans take the drug.

“This is what we were trying to isolate from wastewater and work backwards to see if we could estimate how much cocaine was being used,” Kinyua said. “We know that 45 percent of cocaine gets metabolized into BE. It’s stable, and you can detect it within 96 hours of intake. That’s why we chose to go with that. When we screened wastewater, we were able to calculate backwards and estimate how much cocaine was being used.”

Sperry said she had not heard a lot about the process prior to Kinyua’s research project, but she said it’s not unusual for students to use relatively new technology on their theses in the new master’s of forensics program at Texas Tech. Students who choose to do these projects are required to develop original, in-depth and problem-oriented research.

“When she came up with the idea, I thought it was just really interesting, especially with respect to law enforcement,” Sperry said. “If they could nail down when the levels of concentration of the cocaine were the highest and the days of the week it was occurring, it is conceivable that law enforcement could determine possible criminal activity. That was the real forensic aspect to the study. I would like to see someone else continue on with the research and to test samples from other parts of the city. I think it would make a great longitudinal study.” 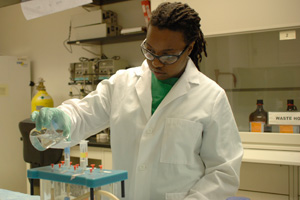 Kinyua said the information she uncovered is useful for law enforcement and social workers, who can use the scientific analysis to understand drug use in the community better.

This study may be one of the first peer-reviewed research projects of its kind to publish illegal drug usage evidence found by screening water collected from a sewage treatment facility in the United States, Anderson said. Because of this, it’s difficult to compare these results to towns of a comparable size, or to drug use information obtained from survey research because participants tend to lie about their drug usage.

“We were surprised by the findings,” Anderson said. “When you convert it back to cocaine equivalents and look at doses and divide that by number of people the waste treatment plant serves 269,000 people, it winds up being a higher number than I thought.”

Kinyua and Anderson said the information is useful for law enforcement and social workers, who can use the scientific analysis to understand drug use in the community better.

“People tend not to be honest on drug surveys,” Anderson said. “You get some feel for what actual cocaine use is. If we could sample the wastewater treatment system at different points within a city, you could isolate drug use or determine drug use in certain parts of a city. If resources are limited, you could have intervention programs focused on specific parts of a city instead of broadly applied.”

For a copy of the journal entry, click here.