Texas Tech alumna and her husband are the first couple to marry in the non-denominational, multifunction chapel. 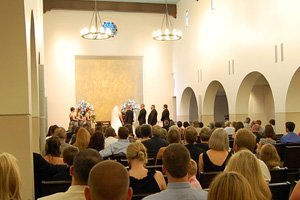 Beth Cochran, a graduate of Texas Tech and TTUHSC, and Daniel Moser are the first couple to marry in the new chapel.

Nearly a year after breaking ground, the Kent R. Hance Chapel hosted its first wedding May 26 on the Texas Tech campus. Beth Cochran, a graduate of Texas Tech and Texas Tech University Health Sciences Center (TTUHSC), and Daniel Moser are the first couple to marry in the non-denominational, multifunction chapel.

“Several generations of my family have graduated from Texas Tech, including me,” said Cochran, the bride. "We have a long history of being Red Raiders. This university has meant a lot to me and my family, so it is very special to be getting married on campus and celebrating this day at Texas Tech.”

Cochran received her bachelor's degree in human development and family studies in 2001 and doctor of medicine from TTUHSC in 2008. A native of Lubbock, she met Moser online and they have been together for more than a year and a half. Cochran is a local family practitioner, and both she and Moser reside in Lubbock.

Reservations for the Hance Chapel, which is located between University Avenue and the

“It was only a few days after announcing the Hance Chapel before we received our first call to reserve it,” said Kym Ruiz, Top Tier events manager. “The Texas Tech McKenzie-Merket & Frazier Alumni Centers host hundreds of weddings on campus each year, and we hope even more will choose to celebrate here now that we have this beautiful chapel.”

Designed to complement the Spanish Renaissance style established on campus, the more than $3 million project has been built primarily with funds provided by Kent Hance, chancellor of the Texas Tech University System.

“This university is such a special place for me, just as it is for so many of our alumni,” Hance said. “Having this first couple marry in the Hance Chapel is a wonderful feeling. I wish the couple the very best and hope many more will enjoy the chapel like they have.”

With the generosity of Hance and others, including the late Margaret Talkington, no taxpayer money has been used to construct the chapel. Revenues generated by the chapel as well as an endowment set up by private donors are being used to sustain operations.