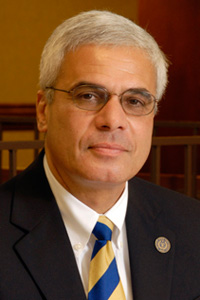 Rallo will oversee system-level strategic planning and help manage the academic profile for each of the system’s component institutions.

The Texas Tech University System Board of Regents approved May 18 the appointment of Joseph C. Rallo, president of Angelo State University, as a vice chancellor for academic affairs. He will begin his duties effective upon the naming of a replacement at Angelo State.

Rallo will oversee system-level strategic planning and help manage the academic profile for each of the system’s component institutions, handling initiatives such as accreditation, academic policies and programs, international affairs, and distance education and online learning. He also will coordinate efforts at the system’s multiple campuses and academic sites, as well as system expansion.

“Dr. Rallo has made a profound and lasting impact at Angelo State,” said Jerry Turner, chairman of the Board of Regents. “We are grateful for his efforts and look forward to his continued contributions to the Texas Tech University System.”

“Dr. Rallo has been an exemplary leader at Angelo State," Texas Tech University System Chancellor Kent Hance said.  “He is an esteemed authority in higher education with more than 30 years of invaluable experience. Dr. Rallo has strengthened the university’s academic excellence and helped advance its online learning programs. We are fortunate to have him join us at the system level.”

Rallo became president of Angelo State in June 2007. Under his leadership, the university has achieved record enrollment of more than 7,000 students, doubled research expenditures and received prestigious recognition from national and international organizations. Rallo also led Angelo State to become the first Hispanic Serving Institution in the system, and during his tenure, Angelo State was named to The Princeton Review’s Best Colleges for three consecutive years.

“Angelo State becoming a member of the Texas Tech University System was one of the first milestones I experienced as president,” Rallo said. “It has been a pleasure to work with the system over the years, and I am delighted and honored to be making an impact on higher education and multiple universities at this new level.”

Rallo is a member of numerous academic boards, including the Board of Trustees of the Southern Association of Colleges and Schools (SACS) and serves as chair of the Texas Council of Public University Presidents and Chancellors and president of the Texas International Education Consortium.

Rallo earned a bachelor’s degree in Russian history from Lafayette College and holds a J.D. from Western New England College and a master’s and doctorate in International Relations from the Maxwell School of Citizenship and Public Affairs at Syracuse University. He served on active duty in the United States Navy and then cross-commissioned to the United States Air Force, with duty assignments in intelligence and logistics. After 27 years of active and reserve service, he retired with the rank of colonel.

The Board of Regents, Rallo and Hance will develop a search process for Angelo State’s sixth president.