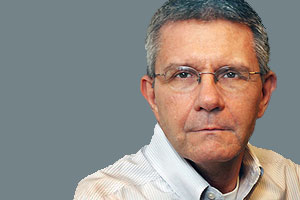 Thomas Knight, a professor in the Department of Agricultural and Applied Economics, was approved by the Board of Regents last week.

A nationally recognized professor of agricultural economics at Texas Tech University has been appointed a Horn Professor, the highest distinction a faculty member can receive from the university.

Thomas Knight, a professor in the Department of Agricultural and Applied Economics, was approved by the Texas Tech University System Board of Regents last week.

“Horn Professors represent the finest among our faculty and attest to the quality of our academics,” said President Guy Bailey. “These individuals are honored for their attainment of national and international distinction and for their research or other scholarly or creative achievements. We value these men and women for their scholarship and their many contributions to Texas Tech.”

The Horn Professorship was established in 1966 to recognize scholarly achievement and outstanding service at Texas Tech. The designation is named for Texas Tech’s first president, Paul Whitfield Horn. Since the professorship’s inception, 82 members of the faculty have been appointed Horn Professors.

“This is not a designation that is awarded lightly,” said Provost Bob Smith. “While being recognized primarily for exceptional and sustained research or other creative and scholarly achievement, typically Horn professors are truly integrated scholars, with abilities melding the tripartite mission of teaching, research and service.”

Knight joined Texas Tech in 2002. He has been the Emabeth Thompson Professor of Risk Management since 2010 and last year received the President’s Academic Achievement Award. Before he joined Texas Tech’s faculty, Knight served as assistant, associate and full professor at Texas A&M University. He earned bachelor’s and master’s degrees in agricultural economics from Oklahoma State University, and he received a doctorate in agricultural economics from the University of Missouri-Columbia.