The Take Back the Night rally and march will begin at 6 p.m. April 21 at the Lubbock County Courthouse. 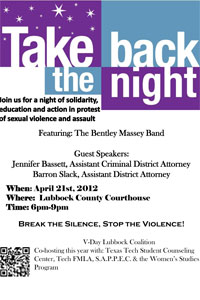 Take Back the Night's mission is to end sexual violence in all forms and to lend support to survivors. Click here to enlarge.

Texas Tech campus and Lubbock community members are taking to the streets to end sexual violence as part of the Take Back the Night rally and march at 6 p.m. April 21 at the Lubbock County Courthouse.

The V-Day Lubbock Coalition, Tech Feminist Majority Leadership Alliance, Sexual Assault Prevention Peer Educator Committee, the Student Counseling Center and the Women’s Studies Program are partnering with the Take Back the Night national foundation to achieve the foundation’s mission of ending sexual violence in all forms and lending support to survivors.

“This event is important for many reasons,” said Jeanne Haggard, a Texas Tech student and one of the event’s organizers. “As a survivor, I find it empowering to participate in events like this, because I know I am not alone.”

From 6-7 p.m., participants will have the opportunity to make posters for the march and decorate an item of clothing to add to the “Clothesline Project.” At 7 p.m., Jennifer Bassett, the Lubbock assistant criminal district attorney and Barron Slack, the Lubbock assistant district attorney, will speak. The Bentley Massey Band will provide entertainment and Ben Massey will speak as well.

The march begins at 7:45 p.m. at the County Courthouse gazebo, travels down Broadway Street to Avenue Q, and then returns to the gazebo for an interfaith candlelight vigil at sunset.

The first Take Back the Night event took place in the U.S. in the 1970s and annually people in cities worldwide continue to host marches, rallies and performances. In 2001, the Take Bake the Night national foundation became a publicly funded charity.

The purpose of the national foundation is not to dampen the spirit or creativity of individuals and grassroots initiatives, but rather to provide greater national and international visibility, and also to provide assistance with organization, planning, sponsorship, supplies and other forms of support for events.

Haggard said many people throughout the world, both male and female, are working together to end violence.

“This makes me feel a sense of hope that one day we won’t have to have events like these to raise awareness because everyone will understand why violence needs to stop,” Haggard said.