The team secured a decisive victory at the Houston Livestock Show’s Intercollegiate competition. 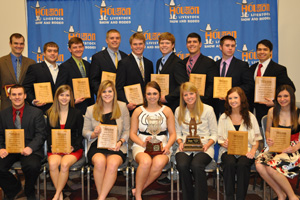 The team, coached by Aaron Jennings and Brittany Thompson, is composed of all freshman students.

“We had a successful year with some narrow defeats,” said Aaron Jennings, the team’s coach and a graduate student in the Department of Animal and Food Sciences. “Winning Houston was a true testament to this team’s talent and work ethic. I fully expect these students to continue to have great success in the Texas Tech judging program.”

The team was coached by Jennings and Brittany Thompson, an undergraduate student in the department.

This was the final contest for the team comprising all freshman students. Previously, the team competed at the National Western in Denver, Colo., where it was narrowly defeated and finished third overall. The team earned second-place honors at the San Antonio Stock Show’s competition on Feb. 10.