The team finished strong in all divisions at the Southwest Region National Intercollegiate Rodeo. 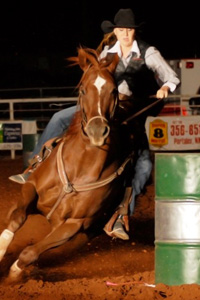 Haley Nelson led the team with her barrel racing win, keeping her at the top of the regional standings. Photo credit: Two Dog Enterprises

Led by a championship performance from a senior English major from Channing, Texas Tech’s rodeo team had a strong outing the weekend of Oct. 8 at the Vernon College Southwest Region National Intercollegiate Rodeo in Wichita Falls. Texas Tech’s Haley Nelson led the team with a barrel racing win that kept her at the top of the regional standings.

“Haley posted the fastest time of the week a 16.92 in go round one to best the rest of 133 barrel racers,” said Chris Guay, Texas Tech’s rodeo team coach. “She then placed second in the top ten finals (short go round) to win the overall championship.”

Meanwhile, Bailey Guthrie, a senior exercise and sports sciences major from Rigby, Idaho, placed fifth in go round one, second in the finals, and finished in a tie for second place in the goat tying event. The good showing places Guthrie at the top of the Southwest region’s goat tying standings after three rodeos.

In the men’s competition Josh Carden, a junior agriculture and applied economics major from Elberta, Al., won first in the steer wrestling finals with a blistering 3.7 seconds. He finished in second place overall.