Douglas 'Dink' Wilson had no idea tradition would grow to current magnitude. 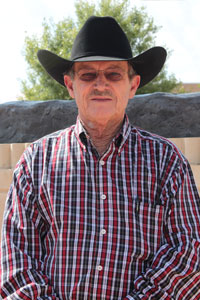 Since he retired, Wilson has operated a registered Angus cattle ranch in Quanah, where he lives with his wife Carolyn.

Raised in the small town of Matador, Douglas “Dink” Wilson didn’t grow up with many opportunities to see the country.

All that changed when he attended Texas Tech.

As the eighth Masked Rider in school history, Wilson traveled the state and country serving as an ambassador for the university. To this day, it remains his favorite part of the role.

“I was lucky enough to do it for two years in a row,” Wilson said of his Masked Rider tenure from 1964-66. “We were in the Southwest Conference back then, so I got to go to Austin, Houston, Arkansas and all those places. Of all the memories, those are my favorite: visiting the different schools and meeting people. Everybody respected the tradition back then, and I think that’s still the case.”

Back then, there were no official tryouts for Masked Rider. Instead, the role was granted to the student who had been appointed keeper of the barn. Wilson didn’t have time for any extra activities because he was already driving home to Matador to farm during his free time.

But one day he received a call from his roommate Douglas Hollar, who also happened to be the Masked Rider.

“He called me a week before the start of football season and asked if I would take over his duties because he wanted to concentrate on academics,” Wilson said. “I had been his assistant and traveled with him to some of the games, so I knew what to expect. But it all still happened pretty quickly.”

Hollar eventually reclaimed his old role and actually served two more years. As for the two years in between, Wilson is grateful to have been given the chance, especially now that Texas Tech is celebrating its 50th Masked Rider.

“Just to be a part of the tradition … I really don’t know how to describe it,” Wilson, 68, said. “When we did it, it was mostly a symbol for the football team. We really had no idea how big the tradition would become. The Masked Rider is now an ambassador for the entire school, and I couldn’t be prouder of that.”

Wilson also is thrilled with the growth in support for the Masked Rider program. He remembers having to use an old trailer and borrowing a truck from a local auto dealership to haul the horse to games.

“We’d borrow it on the weekends and return it on Monday,” he said. “Now the program has so many sponsors and the riders get a scholarship. But they work harder than we did, too. Now it’s a full-time job, so I’m glad they get the help.”

No matter the changes that have occurred throughout the years, Wilson has always supported the traditions. He tries to attend at least one football game a year and make it back to Masked Rider reunions. Earlier this year, he attended the reunion celebrating the 50th Masked Rider, and was thrilled to see Bradley Skinner make his first ride.

Wilson couldn’t help but get a little antsy, too.

“I still get cold chills up and down my spine,” he said. “Heck, I think I can still ride him — as long as he’s not too big.”

After graduating from Texas Tech, Wilson soon was drafted by the U.S. Army and fought in Vietnam. “I like to joke that I received my diploma and draft papers in the same envelope,” he said.

After leaving the Army, he worked as a county extension agent for the Texas AgriLife Extension Services and retired in 1998. He since has operated a registered Angus cattle ranch in Quanah, where he lives with his wife Carolyn.

“I stay busy, but I always keep an eye on the Red Raiders,” Wilson said. “I’ll always be honored be a part of the Masked Rider tradition. The Masked Rider and horse have always been kind of like a magnet – they just draw people to them. It was that way when I was riding, and it’s that way now.”

The Masked Riders and their hometowns from the 1960s: