During his time as mascot, Perry Joe Church embraced the mentality of being a school ambassador. 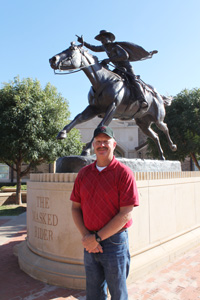 Church works in the animal health pharmaceutical industry in Canyon, and attends home football games regularly with his family.

Perry Joe Church still remembers the first time he dreamed of being the Masked Rider for Texas Tech.

He was in junior high school attending a parade in Midland when the Masked Rider passed by. He was instantly hooked.

“I told everyone who was with me at the time that I wanted to be the Masked Rider,” Church, 51, said. “It was one of the reasons why I chose to come to Texas Tech. When I finally got here and tried out, it was truly an honor to be named Masked Rider and represent the community and the school.”

Church was the 21st Masked Rider in school history, serving from 1982-83 and riding atop Happy VI-II. The school named its 50th Masked Rider (Bradley Skinner) this year, and Church couldn’t be happier the tradition has endured.

“That’s a tribute to Texas Tech,” he said. “Some people want to get politically correct in today’s environment, but the school has always said, ‘This is what we do and this is who we are,’ and kept the tradition alive. They’ve made some changes for safety reasons, and I’m proud of that, too.”

One tradition that hasn’t changed among past and current Masked Riders is the pride and sincerity they have for the role of school ambassador. Church embraced that mentality during his term.

“When you have the cape on that’s one thing, but people actually know who you are, so you have to carry yourself in a positive manner,” he said. “You have to remember that you are representing the school at all times. It was tough, but it was well worth it.”

Church learned a lot of his horsemanship skills as a kid working on his grandfather’s ranch north of Stanton. That’s also where he developed a work ethic that would help him reach his Masked Rider dream, his father Fred said.

“He really had to work hard at it, and it was truly a dream come true for him,” Fred said. “He’s always had his head screwed on right and was a great ambassador for the university. He still loves it, and it will be something dear to him forever.”

Church actually lost his first tryout for Masked Rider, but spent that year serving as an assistant to Kurt Harris. The insight he received was priceless and prepared him for his reign the following year. 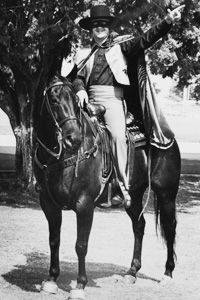 Church was the 21st Masked Rider in school history, serving from 1982-83 and riding atop Happy VI-II.

Church was there when Harris served as the original experiment for the popular Light Show ride. Church said the lighted cape was designed by someone in the engineering department and powered by two motorcycle batteries stacked on each other. The batteries were stowed in a backpack that Harris carried underneath his cape.

The following year, Church took his turn with the difficult setup.

“When we got through with those rides, we were so black and blue,” he said. “We were the guinea pigs to get that started. But it was fantastic, the crowd loved it and it was a such a rush.”

It’s a rush that hasn’t gone away. Church, who works in the animal health pharmaceutical industry in Canyon, attends home football games regularly with his wife Lisa and sons Spencer, 20, and Dee, 17.

Even now, Church says the hair on the back of his neck stands when he sees the Masked Rider charge down the field.

“The tradition is awesome, and you still get that rush even though you’re not on the horse,” he said. “I’m grateful to have been a Masked Rider. Everybody has their own dream and I followed mine.”

Masked Riders By The Decades

The Masked Riders and their hometowns from the 1980s: