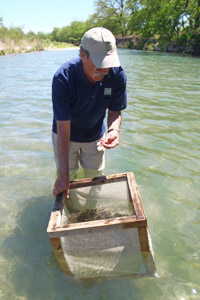 According to Garrett, the Guadalupe Bass Restoration Initiative restocked affected areas of the South Llano River with 17,000 purebred fry.

They stand in the waters of the South Llano River whipping their rods back and forth before landing their flies on the top of the water. There’s a swirl, and the bait disappears. The anglers are in for a good fight.

And while purebred Guadalupe bass numbers have decreased dramatically in recent years, he and others are developing ways to keep them from disappearing in the South Llano with the Texas Parks and Wildlife Dept.’s (TPWD) year-old, $1.4 million Guadalupe Bass Restoration Initiative.

The Restoration of Bass

The Guadalupe Bass Restoration Project, borne from older initiative, is a Texas Parks and Wildlife Dept. initiative funded by the National Fish and Wildlife Foundation to restore eight keystone bass species throughout the Southeastern United States.

Hybridization is, by far, the largest threat to the Guadalupe bass, said Gary Garrett, program director of watershed policy and management for TPWD. He’s been watching the effects of smallmouth/Guadalupe hybridization since the late 1980s.

Since the smallmouth’s introduction in 1974 by TPWD, up to 35 percent of Guadalupe River populations of Guadalupes had hybridized in some areas, he said. In the Blanco River, Guadalupes were completely bred out. Once established, the hybrids' excellent fertility and more aggressive tendencies tend to drive out the native bass species.

For now, hybrids comprise only 3 percent in the South Llano. Garrett surmised that the river’s near-pristine conditions may have given the Guadalupes the advantage, but also said it might be the smallmouth/hybrid intrusion is relatively recent. Either way, the Guadalupe’s foothold isn’t guaranteed. 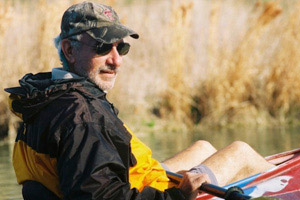 The goal is to not only resolve hybridization, but also to preserve the high-quality habitats for the Guadalupe bass, as well as all other organisms.

In April, Garrett said the Guadalupe Bass Restoration Initiative restocked affected areas of the South Llano with 17,000 purebred fry. Researchers hope to flush out smallmouth and hybrids by strategically stocking areas with purebred Guadalupe bass, eventually breeding out the interlopers. This dilution of genetic pollution method has worked in the headwaters of the Guadalupe River.

What makes this particular program different from the rest is that it isn’t an 11th-hour fix that may or may not work. Garrett called it an ounce of preventative medicine that, invariably should cost less than the pound of cure. Because of the relatively low-impact of hybridization, researchers can use the South Llano as a proving ground, then use the successful approach in more stricken areas.

The purebred breeding project is one of 12 programs attached to the restoration project that includes education and conservation of the river and surrounding land. Six already are in place, while six more await implementation.

“We’re very up front with donors that this is much more than a one-species fish project,” Garrett said. “That gets people’s attention. In addition to resolving hybridization, we want to preserve these high-quality habitats not only for the Guadalupe bass, but for all the organisms and humans that live there. It’s a great way to bring together that concept.”

But not only that, the program has created an auxiliary alliance with private landowners on the South Llano River who are keen on assisting to help the Guadalupes recover as well as protect the near-pristine conditions of the waterway that runs through their land.

“With this watershed conservation approach, a critical component is working with existing landowners in terms of what happens on land and in the watershed affects rivers and streams and the Guadalupe bass,” Arsuffi said. “We developed a relationship with the South Llano River Watershed Alliance. It’s a proactive group of landowners and stakeholders to protect the Llano River watershed and rivers and streams within that watershed. They’ll be instrumental in helping with this project.”

Arsuffi said that since the South Llano runs directly through campus, researchers will use parts of the river and campus for educational purposes that include best brush control practices, rainwater harvesting and examples of best management practice models for landowners to learn from and implement on their own property. Also, the Llano River Field Station is developing a land and river interpretive trail system that explains what Texas Hill Country ecosystems and organisms reside in the area for students, hikers, kayakers and canoers. 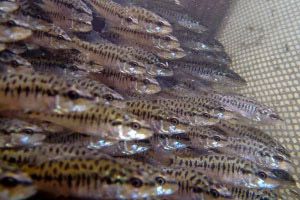 The Guadalupe Bass Restoration Project is a TPWD initiative funded by the National Fish and Wildlife Foundation to restore eight keystone bass species throughout the Southeastern United States.

“It’s a whole lot cheaper and more effective to recognize issues in a watershed early,” he said. “It’s more cost effective than waiting until they’re so polluted that you can’t swim in them or fish in them anymore. The South Llano River Watershed Alliance is believed to be the only pro-actively formed group of watershed stakeholders in Texas. There are comparable alliances out there, but they form only after a river becomes so polluted something has to be done. We’ve got a healthy river with a few issues, and we want to decide how we keep it healthy.”

Small landowner Scott Richardson, president of the South Llano Watershed Alliance, said he and others in the alliance were unaware of the problems Guadalupe bass faced until organizers with the Guadalupe Bass Restoration Initiative contacted them last year.

Though different landowners in the alliance have different objectives, most everyone acknowledges the importance of conserving and preserving the water as well as the land around it, he said. Helping the purebred bass in the South Llano and adjacent waters has become a priority for the alliance.

Recently, the alliance met with TPWD and other organizations to consult on the Oasis Wildfire site in May, which burned 6,000-8,000 acres of land adjacent to the South Llano River.

At the meeting, governmental agencies, researchers and landowners discussed developing a workshop in the next couple of months for landowners impacted by the fire to deal with the soil erosion that’s sure to follow. Also, they discussed ways to seed affected areas to stop topsoil from washing into the river when rain returns.

“I think water is our No. 1 issue facing Texas, and I’ve been involved in other organizations addressing natural resources,” Richardson said. “This was an opportunity to do something locally. I have a strong interest in natural resources and land. I’m a firm believer in education, and we approach these issues with education. That’s what our alliance is all about.”