Colorado native is proud to be next in line for school's mascot tradition. 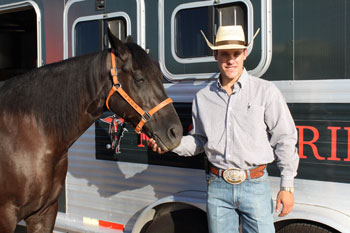 Bradley Skinner said one of his favorite roles as the new Masked Rider is traveling and promoting Texas Tech throughout the state.

As far as his father Scott is concerned, Texas Tech could not have chosen a better representative.

Bradley, an Arvada, Colo., native, transferred to Texas Tech from Colorado State University last summer. He has since fallen in love with Texas Tech, and on Saturday will become the 50th Masked Rider to lead the football team onto the field.

“When he first told me he wanted to transfer, I said it would be all right with me if he could work things out,” Scott said. “It turned out to be a great experience. He really loves it down there, and I couldn’t be more happy for him.”

Bradley first visited Texas Tech as a member of the Colorado State ranch horse team, and he remembers being impressed by the friendly people and facilities.

As for the Masked Rider, he first saw the mascot in high school while watching a football game on television. It was not until he transferred to Texas Tech, however, that he found out the Masked Rider is a student.

“I thought that was so cool,” Bradley, 22, said. “I think that’s what makes us unique and special, because we have to balance school and all the work that comes with being the Masked Rider. Plus, as a student you can be a better representative of the school than someone who is hired.”

Bradley did not think twice about trying out. He rode his first horse at age 5, and like his father says, “never looked back.” He grew up showing horses and in 2003 was the youngest member (age 14) in Colorado 4-H history to achieve Level 4 Master Horseman, the highest horsemanship level attainable in the horse project. 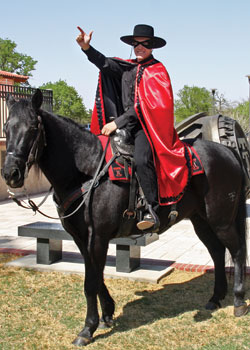 The big event comes Saturday, when Bradley and his horse Midnight Matador take the field for the first time.

“When he tried out for the Masked Rider, I was so excited because I just knew he would get it,” Scott said. “My son has always been an inspiration to me, because whatever he wants to do in life, he just goes out and does it. I’m so proud of him.”

Bradley officially became the new Masked Rider in April at the annual Transfer of the Reins ceremony. He has kept busy since, making almost 50 appearances this summer.

Of course, the big event comes Saturday, when Bradley and his horse Midnight Matador take the field for the first time. Many former Masked Riders also will be in attendance as part of a reunion celebrating the ride of the 50th Masked Rider.

“I’m pretty confident about the run and really excited because I hear it’s an adrenaline rush like no other with 60,000 people screaming,” Bradley said. “I’m not going to lie, it kind of scares me because there are going to be other Masked Riders next to me who have already done it hundreds of times.”

Bradley’s family also will be there, including his father, mother (Sandy) and sister (Kelsey). They too have fallen in love with Texas Tech.

“We came down for the Transfer of the Reins and we were treated like alumni,” Scott said. “It was unbelievable how nice everyone was. If my parents didn’t still live up here (Arvada, Colo.) and my wife didn’t have a good job, we would transfer to Texas Tech.”

One thing is for sure: Texas Tech definitely is home for Bradley.

“I love traveling all over the state representing the school that I love,” he said. “I really do love Texas Tech, and I want everybody to come here.”

Welcome Back: Red Raiders Are Ready for New Academic Year