Researcher says managing vegetation is key to retaining precipitation — when it comes. 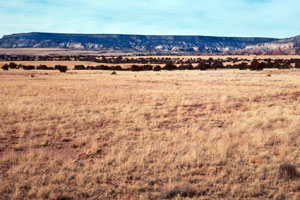 According to the United States Department of Agriculture, Texas has some 94 million acres of rangeland currently under drought conditions.

As a blistering drought continues to plague huge portions of Texas, a Texas Tech researcher says that even now in the midst of the fight it’s time to plan ahead and logically plot a path for pulling more than 90 million acres of valuable rangeland back from the brink.

“We need to manage vegetation, so that when it does rain we can take full advantage of that precipitation,” said Ron Sosebee, a 40-year expert on battling back the brutal effects of Texas’ droughts and a professor emeritus with Texas Tech’s Department of Natural Resources Management.

That means taking full advantage of grass growth when it’s most available and defoliation is least detrimental, he said. Increased infiltration of water and decreased run-off erosion are key.

Sosebee advises capturing most, if not all, of the rain when it occurs. Storms here on the plains are typically the cloudburst variety that produce intensive rainfall, in many cases rates of five to 10 inches in as little as 15 minutes. Unless there’s good ground cover, as much as 90 percent of that water runs off.

“It’s critically important that we maintain adequate vegetative cover to retain as much precipitation as possible where it falls,” Sosebee said. “Not taking that precaution opens the door to serious soil erosion.”

Another area the land managers should consider is planned deferment of grazing following drought conditions. Year-long grazing might be beneficial for animal production, but it’s probably not the best scenario for management in preparation for droughts or for vegetation recovery following a drought, he said.

“Any system that incorporates protection from grazing during the post-reproductive stage of growth to dormancy is beneficial to perennial grasses,” Sosebee said.

In Texas, where the drought has been among worst, virtually no part of the state has been untouched. In June, the United States Department of Agriculture designated all 254 counties in Texas natural disaster areas, qualifying them for varying levels of federal relief.

According to the USDA Natural Resources Conservation Service in Temple, the state has some 94 million acres of rangeland currently under drought conditions. That’s 55 percent of the total grazing land in the Lone Star state.

Historically, the Texas Tech researcher noted that drought is really the norm in many rangeland areas of Texas. As a result, he suggests that management of those lands be designed to accommodate dry years, rather than holding out for years with average or above average rainfall.