The institute received a $1.1 million research award from the U.S. Army. 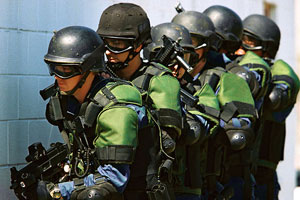 Ron Kendall, director of TIEHH, said this was the first funding cycle of a new three-year contract for the program, which was chartered at Texas Tech in 1999.

"This will allow us to continue our work in countermeasures to chemical and biological threats – in other words, counterterrorism measures," Kendall said. "The program has enjoyed a lot of success in working with the Army in the last several years, publishing more than 100 scientific publications, a major textbook and critical patents such as the Fibertect® decontamination wipe."

"Our scientific team at TTU works very closely with the Edgewood Center of the U.S. Army and identifying the research areas that they need and the country needs to be ready for chemical and biological threats," Kendall said.

As research coordinator for the Zumwalt program, Steve Presley screens and determines which research priorities the program should have. Since its inception, the program has received about $24 million in funding, he said.

"Currently, the program has about nine long-term projects, such as developing sensor capabilities to detect chemical or biological agents in the environment," Presley said. "That's a long way to go from basic research to take it to applied detection of chemical and biological agents where you can determine exactly what you're dealing with. This funding helps us continue these long-term projects."

The program focuses on three areas: high-performance computer modeling and simulation of how toxic agents may move in the environment, development of personal protection items such as the Fibertect® wipe, and development of threat-detection equipment.

"One of the objectives that the Army's Research, Development and Engineering Command encourages is for us to take these technologies we develop for military applications and make them commercially viable where they can transfer to the civilian population for responders on the domestic side," Presley said. "The post-9/11 world has kind of matured, and there are always newer threats. It's always evolving. One role that the Zumwalt program plays is to help the military adapt to the changing threat landscape."