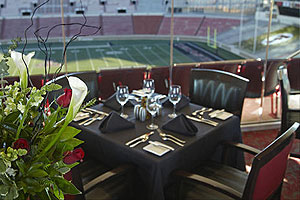 The Texas Tech Club, the private-member club located in Jones AT&T Stadium on the Texas Tech campus, announced April 11 that it has set a major membership milestone, surpassing the 1,000-member mark six months after opening.The Texas Tech Club is a member of the ClubCorp family of clubs.

Debuting in the fall of 2010, The Texas Tech Club, which reflects Texas Tech's rich history and features floor-to-ceiling windows offering panoramic views of the stadium, now serves as the preeminent spot in Lubbock where members can connect with one another during a variety of social, dining and networking events offered by the club or as the ideal place to bring family, friends and colleagues to dine in style, conduct business or entertain in a personalized setting. Additionally, the backdrop of the stadium paired with the club's elegant décor have made the club one of the most talked-about venues for weddings and special events.

"We are very excited about how quickly the club has become an integral part of the university and the community," said Rory O'Neill, general manager for The Texas Tech Club. "Our members, which include alumni, faculty and staff, along with the Lubbock professional, civic and social community, are finding that the club serves as a home-away-from-home, within the spirited tradition of Texas Tech, where they really can connect, work, host and celebrate."

"The Texas Tech Club is a great amenity for the community and is a great asset for our university," said Kent Hance, chancellor of the Texas Tech University System. "Texas Tech is proud to have such an outstanding establishment on its campus."

The Texas Tech Club officially opened last September, in conjunction with the first Red Raider football game of the 2010 season, after a groundswell of support from Texas Tech, the Lubbock community and the club's advisory board of governors.

"Not only is The Texas Tech Club a beautiful place to gather and socialize, but the food quality and its presentation is superb," said Nancy Neal, co-chairperson of The Texas Tech Club's board of governors. "We are very thankful to all of the staff and supporters who have been instrumental in the club's success, and look forward to building our relationships with the great people of Lubbock and Texas Tech."

The Texas Tech Club, which generally is open six days a week, also provides food and beverage catering services for suites and premium seat holders in both sides of the stadium on game days, as well as supplies catering for all non-game-day meetings and events in the stadium.

Dallas-based ClubCorp USA Inc. is The World Leader in Private Clubs®. Since its founding in 1957, ClubCorp has operated with the central purpose of Building Relationships and Enriching the Lives® of its members. ClubCorp owns or operates a network of more than 150 golf and country clubs, business clubs, sports clubs and alumni clubs in 25 states, the District of Columbia and two foreign countries that serve over 350,000 members, with more than 14,000 peak-season employees. ClubCorp properties include: Firestone Country Club (Akron, Ohio); Mission Hills Country Club (Rancho Mirage, Calif.); Capital Club Beijing; and Metropolitan Club Chicago.