The association's goals include transparency, improving existing services and creating an advisory council. 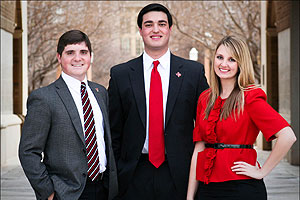 (L-R) Tyler Patton, Mike Uryasz and Alex Moore plan on creating a student government that everyone can relate to.

In the past, student government has lost touch with communicating with students and student organizations, Patton said. He wants to work on transparency this year; insisting making changes within the association will increase interaction between students and the senate.

Moore said she is most interested in making student government accessible to students. She plans to create an open forum, which will allow students to speak directly to senators, as well as broadcast meetings online to keep students aware of the process.

"Students should know they can approach us with ideas," Moore said. "I want students to know they can make an impact, and we can work together."

Uryasz says he can relate to the frustrations students have about the busing systems on campus. He plans to increase buses on routes, as well as coordinate with off-campus living to provide more transportation for students.

He also hopes to increase safety of students by reducing drunk driving. Texas Tech students have the option to call a SafeRide taxi to drive them home if they are unable. Presently, the system is rather slow, yielding unacceptable results.

"Drunk driving doesn't need to happen," Uryasz said. "The current SafeRide system allows it to more often than it should."

With internal and external goals set in place, Patton plans on creating a student government that everyone can relate to.

Bridging the gap between students and administrators is important, Patton said. He wants to set up an advisory council of students who can meet with administrators and the board of regents to add their input.

"Students don't have to be elected officers to get their voices heard," Patton said.

Though the team has clearly defined jobs, each member has a stake in the other's success, Patton said. We want to work on issues together, because we're equally invested in the achievements of student government this year.

"Students need to know we're here to work," Patton said. "We have a chance to create synergy across campus, among students, student organizations and administration."