This corner of Ukraine is not the predicted nuclear desert, but resembles a pristine, untouched wilderness.

Swans bob on the gentle waves of Glyboke Lake in Ukraine.

As a cool breeze blows, green trees and marsh grasses sway, making the spot look like an ideal place for a picnic. It’s not unusual to find moose, endangered horses and other large wild animals drinking from these waters. Only the crackling reminder of a Geiger counter attests to the fact that this is still the second hottest radioactive site in the area after the meltdown of reactor No. 4 on April 26, 1986, at Chernobyl.

Twenty five years later, this corner of Ukraine reminds Robert Baker, director of the Natural Science Research Laboratory, of a pristine, untouched wilderness. Only Chernobyl’s ruined reactor, now encased in concrete, and abandoned buildings from neighboring villages and the city of Pripyat testify that humans ever lived in the area.

The 20-mile radiation exclusion zone around the reactor is still too dangerous for permanent human habitation. But all species of plants and animals that should be there, are there, said this Texas Tech Horn Professor of Biology. No species got wiped out completely. None decided never to return. 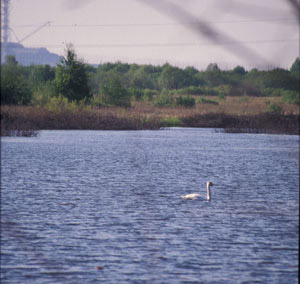 A swan bobs on the gentle waves of Glyboke Lake in Ukraine, where only the crackling of a Geiger counter reminds you of Chernobyl.

That fact begged an important question to Texas Tech biologists as to why plants and animals are so prolific here. After all, the site of the world’s worst environmental disaster was slated to become a nuclear desert, according to the May 12, 1986, issue of TIME.

And yet, that’s not the case.

Birch trees climb toward the sky in the hottest zones, replacing their dead pine brethren. Deer bring their young to graze in lush green pastures. Wolves stalk prey and raise their cubs. Birds and waterfowl nest in the Red Forest and Glyboke Lake. The area is alive and thriving.

“The countryside is beautiful,” Baker says. “The animals and plants are in greater numbers now than if the reactor had not gone down. The ecosystem is as it was before humans started living out there – except for the radiation. It seems as though normal human activities associated with agrarian society are more destructive than the world’s worst nuclear meltdown.”

At 1:20 a.m. on April 26, 1986, workers at the nuclear power plant near Chernobyl lost control of the No. 4 reactor during a test. An explosion sent the first plume of radiation to the west of the reactor, which traversed just a mile south of Pripyat– considered at the time a model Soviet city.

Rising heat from the reactor on April 27 sent aerosolized radiation into the air. Worried by this, Soviet officials attempted a brave containment approach by dumping sand from helicopters onto the exposed reactor core.  Just like throwing a log onto a fire, this sent a second plume of radiation into the atmosphere that coiled north and east around Pripyat, catching it in a deadly vice. In all, the tragedy contaminated a 93,000-square-mile area in Belarus, Russia and Ukraine, according to the International Atomic Energy Agency.

Ron Chesser, director of Texas Tech’s Center for Radiation Studies, was the first American scientist allowed full access to the exclusion zone. After studying the plumes, he estimated about 13,230 pounds of radioactive material containing about 150 different isotopes launched into the air from the reactor, which burned for 10 days.

With radiation, it’s always a “good news, bad news” scenario, Chesser said. For example, 98 to 99 percent of the radiation released is now decayed – good news. The 1 or 2 percent left has long decay rates and will be there for decades yet to come – bad news.

Some areas around Chernobyl are still too radioactive for safe human habitation – bad news. But the good news is once out of the initial high-concentration radiation zones from the plumes, the radiation intensity diminishes almost exponentially over distance, Chesser said.

“One thing that’s very important to understand about Chernobyl, because it really affects people’s preconceived ideas, is that proximity to the reactor has very little to do with how much radiation dose an organism is experiencing,” he said. “You can come to the reactor from the east and actually not experience a huge change in the radiation background. However, if you approach it from the west as you start to cross the first plume of nuclear fuel was released, then you’ll see a very dramatic increase in radiation background.”

All of Texas Tech’s Chernobyl researchers admit that when they first began looking to see how radiation affected animals in areas with the highest radiation, they expected to find gross mutations in the DNA of any of the animals they studied.

What they found, they said, shocked them.

“The first time I went over there I was quite naïve,” Chesser said. “I thought some of these biological effects would be quite obvious. You’d think that with the high radiation released by Chernobyl that you would easily see some type of genetic change, you may see some morphological variance, and you might see some species that are gone. But over the years, we’ve learned that nature is much more resilient than we first thought. What we would call high radiation in biological terms as causing damage, is really low dose. It’s hard to convince people that Chernobyl is low dose, because everywhere you look there’s radiation. The amount of radiation that’s imparted into biological tissues is still not sufficient to cause a great degree of genetic damage.” 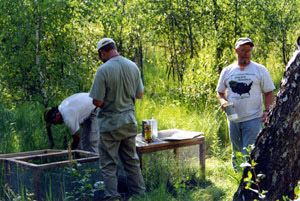 Of greatest concern was the bank voles' exposure to cesium-137 and strontium-90. Unlike other radioactive isotopes, these elements were recycling through the environment inside animals.

When designing experiments, Baker and Chesser chose to study the bank vole, Myodes glareolus, because it lived in a wide range of areas across Ukraine and Europe, but also because the animal was living, breeding and dying in the most radioactive areas.

Of greatest concern was these animals’ exposure to cesium-137 and strontium-90. Unlike other radioactive isotopes that are slowly going down into the soil, these elements were recycling through the environment inside animals. Bodies mistake strontium-90 for calcium and build it into bone material. Cesium-137 mimics potassium, and gets taken up into muscle tissues.

Baker said the team calculated this particular animal’s radiation dose and found it to be the highest of any animals in the area. If any mammal would show signs of mutation or genetic disruption, the bank vole would be the one.

Brenda Rodgers was a doctoral student who began working on Chernobyl in 1997. Now an assistant professor of biology, she said she remembers running the tests.

“We started with a species of vole and collected them in exclusion zone and in uncontaminated regions to look to see if we could detect genetic differences between the two populations,” Rodgers said. “They came from similar habitats – the primary difference being radiation exposure. We looked at markers for chromosomal damage. This was a blinded study. I didn’t know what the outcome was going to be. After analysis, decoding and comparing results, I was rather surprised to find no difference in the DNA damage between those animal living in the clean area and those living in the exclusion zone. Of course you start to wonder what’s at the root of this. And so we began more focused studies to see if we could determine what biological differences were between these two groups.”

“Does that change life expectancy or fitness of individuals living there? We certainly don’t know that,” he said. 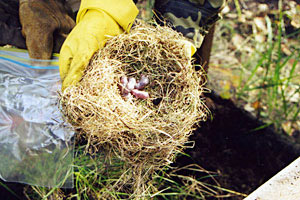 Because the bank vole isn’t genetically profiled like a lab specimen, the team decided to test Chernobyl’s radiation on lab mice.

In 2005, Texas Tech researchers and West Texas A&M University researchers completed a study on mice for the U.S. Department of Energy. Thanks to new technological advances in cell biology, they found the mice exposed to radiation began an amazing adaptation. As expected, the radiation affected the gene expression in their cells.

Baker, a co-investigator on the project, says the results changed his mind completely about radiation’s impact on living things.

After researchers placed mice in Chernobyl’s radioactive area, their cells formed greater amounts of protection against radioactivity. Researchers found the mice produced more amounts of proteins and enzymes that repaired DNA broken by the radiation and countered the ill effects of radiation-created oxygen radicals, which can cause cell damage and disease.

Baker admits the findings cause controversy.

Currently, two schools of thought exist on what radiation exposure does to living things. One thinks that as a plant or animal receives a certain level of radiation over a lifetime, it will die from the exposure. The other camp, to which Baker now belongs, believes that while certain high doses of radiation will kill living things, regular exposure to radiation helps plants or animal cells respond to a radioactive environment in a positive way.

This response is called hormesis.

“We joke that everyone should have a ‘Ronco’ radiation device under their bed to improve their health,” he says. “I now believe there are benefits, and there is a positive response to low levels of radiation that creates DNA repair mechanisms and proteins that protect your cells.”