Thousands of documentaries have been produced on this subject, but an unusual genre is quickly gaining respect by authorities in Holocaust research. 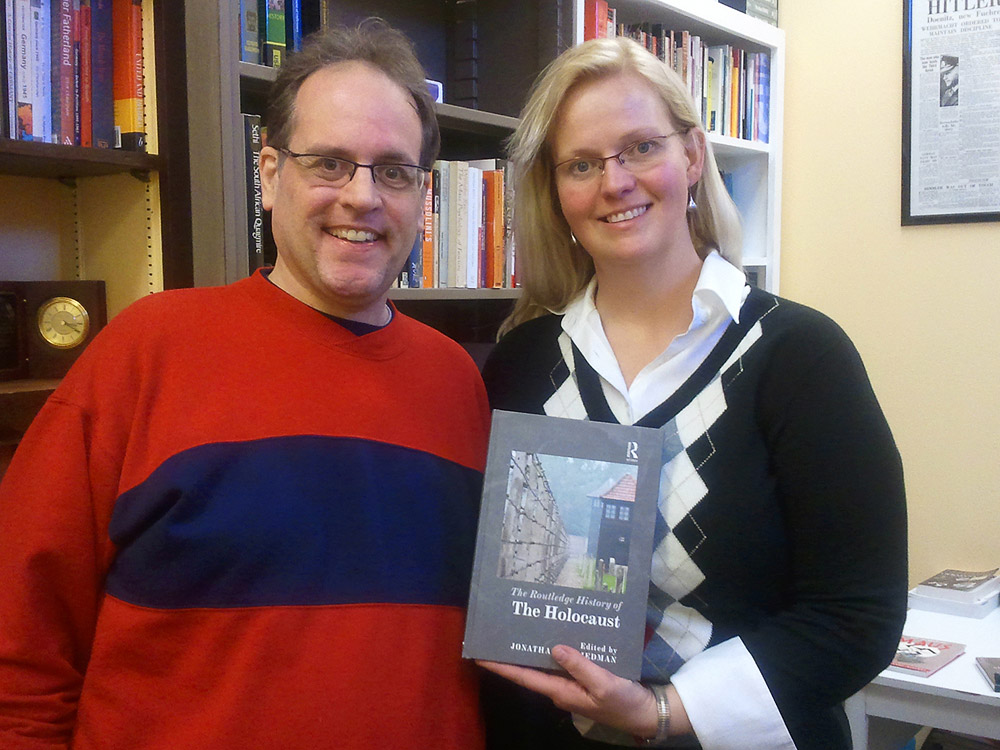 Robert G. Weiner and Lynne Fallwell recently were published in the Routledge History of the Holocaust.

The Holocaust continues to confront scholars with elusive questions even after nearly seven decades and hundreds of studies. Thousands of documentaries have been produced on this subject, but an unusual genre is quickly gaining respect by authorities in Holocaust research.

Contributions on the topic from two Texas Tech University researchers recently were published in the Routledge History of the Holocaust. The volume covers a wide range of topics, including the Holocaust in post-war memory and culture.

Lynne Fallwell, assistant professor of history, and Robert G. Weiner, associate humanities librarian, in addition to an entry on Holocaust documentaries, have contributed an entry on “Sequential Art Narrative and the Holocaust” to the Routledge volume in an effort to draw attention to this often overlooked genre.

Their essays are a culmination of two years of intense collaboration – on a subject many are reluctant to talk about.

After the Nuremberg Trials, further study and discussion of the Holocaust went underground.

“Survivors wanted to move on with their lives,” Fallwell said. “Few realized the need to talk about the Holocaust until about 1961, when the Adolf Eichmann trial came around.”

Eichmann was in charge of the deportation of Jews out of Europe to the east. He fled to Argentina following the war, where he was ultimately found by Israeli agents, tried, convicted and executed by hanging in 1962.

“The renewed interest following the Eichmann trial also coincided with the first generation born after the war reaching adulthood, and asking questions of their parents,” Fallwell added.

It was not until the 1980s, when plans began for the Holocaust Museum in Washington, D.C., and the Berlin Wall came down, that many survivors had their first opportunity to return to the places they had left behind.

Holocaust awareness reached its peak on the 50th anniversary in 1995. 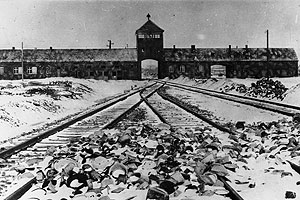 More than 65 years after the liberation of the Auschwitz-Birkenau concentration camps, Holocaust education is now included in many secondary and post-secondary curricula.

More than 65 years after the liberation of the Auschwitz-Birkenau concentration camps, Holocaust education is now included in many secondary and post-secondary curricula. The purpose is two-fold: so that the events are never forgotten and so they are never repeated.

Witness accounts of this dark period are quickly fading, however.

“Many survivors have long since passed on, while personal experiences of others are clouded by the trauma itself or lapses in aging memories,” Fallwell said. “So it is more important than ever that we get an accurate record of what actually happened.”

The problem with this dark period in history is that there are many holes in the storytelling. Film footage is limited, and many documentaries are only witness accounts after-the-fact. Those working in Holocaust education, like Fallwell, are now searching for new ways to illustrate these stories. That is where sequential art has proven its worth.

“With the sequential art format you are engaged with both sides of the brain, by interpreting the visual with the right brain and the narrative with the left,” Weiner explained. “Readers seem to have less of an attention span and appreciate more visual generation.”

One of the first such sequential art narratives would be the 15-page “Mickey Mouse in the Gurs Internment Camp,” by Horst Rosenthal, a prisoner at Auschwitz. He chose the popular character without Walt Disney’s permission and depicted him as a naïve mouse who demonstrates the injustice of Nazis and how the Jews were regarded as something less than human. Tragically, Rosenthal did not live to see his artistic legacy. 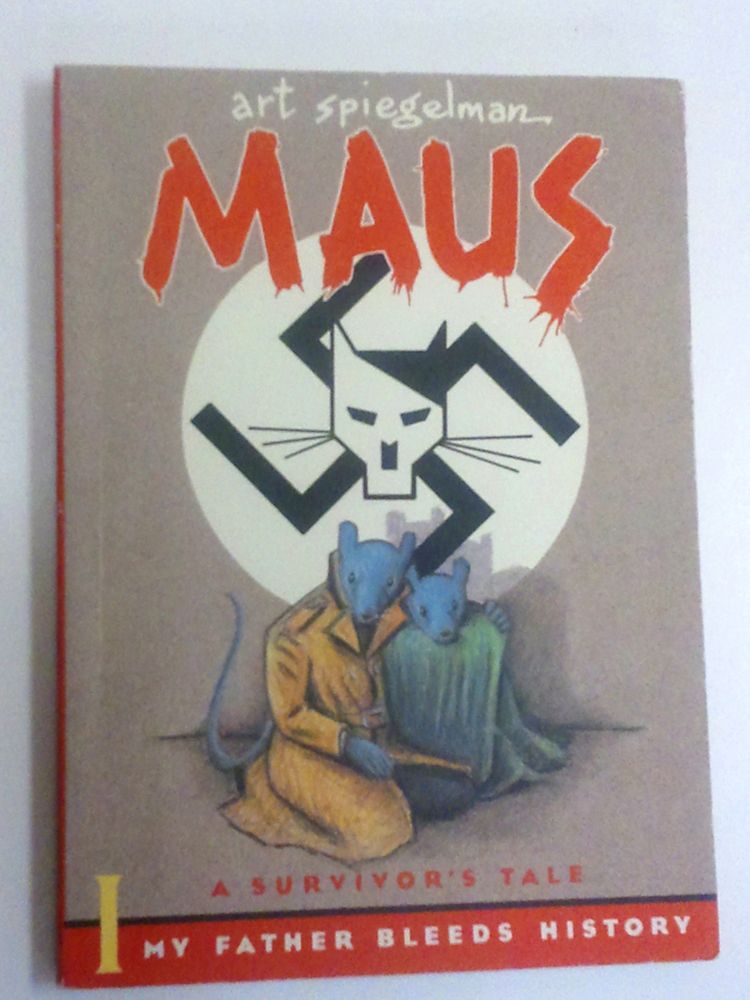 Was Mickey a precursor for the first such Pulitzer Prize-winning novel of its kind? Some argue that he was.

Was Mickey a precursor for the first such Pulitzer Prize-winning novel of its kind? Some argue that he was. Either way, a rodent was again the protagonist in Art Spiegelman’s “Maus: A Survivor’s Tale.” This graphic novel was a biography of the author’s father Vladek Spiegelman, a Polish Jew and Holocaust survivor. Maus depicts his life in Poland during World War II and also his later years living in New York City.

Throughout the work, Jews are depicted as mice, Germans as cats and Poles as pigs. Other animals are used to represent people of other nationalities, religions and races. Each group of characters was drawn identically, with only minor details changed to distinguish between them. Spiegelman’s goal was to demonstrate the absurdity of classifying people as one and the same.

“Since its publication, Maus has been the subject of numerous essays, and at least 35 graphic novels dealing with Holocaust have found their way to press,” Weiner said. “Some are for education, others are fictional, or even superhero fare.”

Comic books of the time were keenly aware of Adolf Hitler’s hate mongering, and often portrayed the Nazis as the antagonists in their story lines.

“The cover date on the premiere issue of Captain America Comics was March 1941, before the United States had even joined the war,” Weiner said. “And yet, that issue became the first comic to feature a main character slugging Hitler on its cover.”

Ultimately, these comics provided a morale booster to the serviceman by providing a real-life villain to defeat. On the flip side, the publications aggravated Nazi sympathizers. Threats made to publishers resulted in a strong police presence outside their offices.

The Third Reich also took notice, responding with satirical comic strips of their own in Das Schwarze Korps (German for “The Black Corps”), the official weekly newspaper and propaganda agency of the Schutzstaffel, or SS. The publication put forth anti-American propaganda, and even attacked the newly created Superman, written by Jerry Seigal who was Jewish. 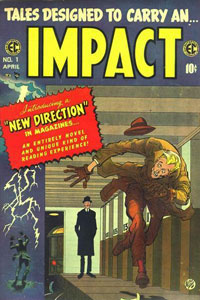 "Impact" was a graphic narrative dedicated to stories with shock endings – at a time when little was written about the murder of millions of Jews.

In the years after World War II, EC Comics published a comic book called “Impact.” It was a graphic narrative dedicated to stories with shock endings – at a time when little was written about the murder of millions of Jews, political oppositionists and homosexuals.

In the 1955 debut issue “Master Race,” Bernard Krigstein illustrated citizens of the camps covering their noses with handkerchiefs in an effort to stifle the smell of human flesh burning in the ovens.

The comic was short-lived, with only five issues published.

The Holocaust returned to mainstream comics in 2008 with the series Magneto Testament. Magneto, longtime nemesis of the X-Men, is a survivor of Auschwitz. This series (also published as a graphic novel) took a closer look at Magneto’s past, including his time at the camp.

The renewed interest in Holocaust education may be attributed to the attacks of Sept. 11. Since then, people have demonstrated awareness for such tragedies, and a need for heroes.

Weiner heard about the development of this volume and approached the editor, Jonathan C. Friedman, about submitting a contribution for consideration. He said Friedman was keen on the documentary aspect, but the subject of graphic novels required a recap of their long and important history.

“Routledge is a definitive source,” Weiner said. “It is an honor to be included.”

“It is a top-notch academic press that demands a high standard,” Fallwell added. “This volume includes essays from leaders in their field. Texas Tech is in some prestigious company.”

After years of organizing, The Museum of Texas Tech University will host Deadly Medicine: Creating the Master Race. Read More.