Raiders Helping Others: Students Use Spring Break to Volunteer

The on-campus resident group volunteered at Give Kids the World, a resort for children with life-threatening illnesses. 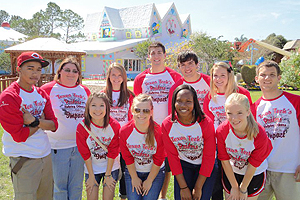 RHO performed a number of tasks over the break including handing out towels at the pool and serving ice cream to kids at breakfast.

Raiders Helping Others (RHO), a group of Texas Tech University on-campus residents, spent spring break volunteering at Give Kids the World (GKTW), a resort for children with life-threatening illnesses in Kissimmee, Fla.

“It was more than I expected it to be,” one undergraduate volunteer said. “The overall volunteering made such an amazing impact on me.”

Kuehnert said one mother told him their family’s trip had been a dream come true for their ill child. To know that college students would volunteer their time and money to help families like them added to the joy she experienced, he said.

RHO performed a number of tasks over the break including handing out towels at the pool, serving ice cream to kids at breakfast, and helping families take photos with Universal Studios’ characters.

Kuehnert said his hope, when developing RHO, was to provide an opportunity for younger students to get connected with volunteer projects so that it would become a part of their lifestyle.

“Through this organization our students learned a great deal about an element of life that most of them had never experienced,” said Kuehnert.

He said seeing Texas Tech students challenge themselves to push their limits was very inspiring.

“Volunteering has always been important to me, and I hope to inspire Texas Tech students to use their talents to help others as well,” Kuehnert said. “RHO was one step in helping make that happen.”