The opening reception will be held from 6-9 p.m. on April 1 at the LHUCA. 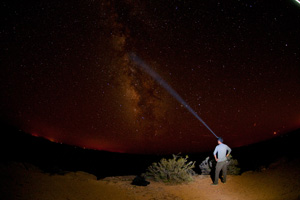 The north rim of the Grand Canyon in Arizona. Photograph by Chris Taylor.

Texas Tech College of Architecture and the Louise Hopkins Underwood Center for the Arts (LHUCA) announce the Land Arts 2010 Exhibition.

An opening reception will take place 6-9 p.m. April 1 at the LHUCA Warehouses at 1001 Mac Davis Lane.

The students traveled 7,000 miles over two months, camping at locations across the Southwest, as they explored natural and human forces that shape contemporary landscapes, from geology and weather to cigarette butts and hydroelectric dams.

Chris Taylor, director of Land Arts of the American West, led the program and was assisted in the field by alumnus Sean Cox.

Land Arts of the American West was founded at the University of New Mexico in 2000 by Bill Gilbert. Taylor co-directed the program from 2001 until establishing it at Texas Tech when he moved from the University of Texas at Austin in 2008.

From noon to midnight on April 2, Land Arts of the American West and Landmark Arts will lead a public environmental art action in Lubbock, as a participating venue of the 2011 Texas Biennial.

Land Arts 2010 Exhibition will also be open 6-8:30 p.m. on April 14, and 9-4 p.m. on April 15 in conjunction with the third annual Spring into Green event sponsored by the West Texas Branch of the US Green Building Council. This program in the LHUCA Warehouses will include an exhibit of 2011 eco-friendly hybrid and electric cars, the Texas Tech Solar Car, plus a classic '57 Chevy.

A closing reception from 6-9 p.m. May 6 will coincide with the First Friday Art Trail.

The exhibition will be open for viewing on Saturday afternoons from noon to 4 p.m. and by appointment. Visit the website for details.