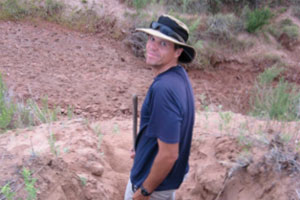 Stance Hurst's presentation focused on the Paleoindian people of the Southern Plains.

Almost 12,000 years ago, before the invention of butcher shops and meat packaging factories, the Paleoindian people of the Southern Plains manufactured their own weapons to kill that week's dinner.

These hunters and gatherers spent part of their time flintknapping, or shaping, a piece of large stone such as chert, obsidian or quartzite into a projectile point sharp enough to kill an enormous ancient bison, said Stance Hurst, field manager for the Lubbock Lake National Historic Landmark. He discussed this topic during his presentation, "Ancient Paleoindians and Landscapes."

Hurst described this process as anything but easy.

"A good flintknapper can probably make a Paleoindian point in 20-30 minutes," Hurst said. "The problem with flintknapping is that when you make a mistake, often times you cannot correct it and you have to start over again with a new piece."

Today, remnants from these ancient cultures are relatively nonexistent. Hurst said the projectile points and the tools the Paleoindians used to manufacture them are an important part of understanding past hunter-gatherer groups.

Researchers have classified the Paleoindians period into three sub periods:

Hurst said these eras mark the waning of the Ice Age and the transition into our current warmer climate. Each period can be identified by the style of points used for hunting.

"Archaeologists have defined Clovis, Folsom and Late Paleoindian time periods based in part on changes in projectile point technology and other aspects of stone tool technology," he said. "From the excavation of sites across the Southern Plains, particularly at the Lubbock Lake Landmark, we have found that there are also changes in mobility and subsistence strategies." 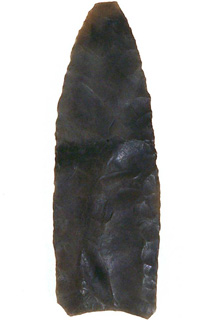 Projectile points the Clovis people used for hunting had a distinct style with a longer, exposed blade, so the point could also be used as a knife.

The hunter-gatherer groups of the Clovis Period were more "generalists" than the other groups Hurst said. There were no extreme season changes during this time, so a variety of plants and animals existed in a central location. Because of this, these people were not as particular about what they hunted. They hunted or gathered whatever plant or animal resource they encountered.

The projectile point the Clovis people used for hunting had a distinct style with a longer, exposed blade, so the point could also be used as a knife. These points were fluted at the base, which provided a more secure attachment to the wooden spear.

Upon the introduction of the Folsom Period, a drying trend led to an expansion of short-grass prairies, which facilitated an expansion of the bison population. Animals such as the mammoth, camel and horse had become extinct by the end of the Clovis period, so bison were the only large animals left for the Folsom people to hunt – this meant the people needed to adapt their weapon for a different kill.

The Folsom points contained a long flute, or distinctive groove, which distinguished them from Clovis points, signaling a change in hunting strategies.

Hurst believes that the amount of people on the Southern Plains increased during the Late Paleoindian Period. These groups traveled shorter distances than the Folsom people, so there were more variations in projectile point styles during this period.

Like the Clovis point, some of the Late Paleoindian points were crafted with a longer blade so they could be used as a knife as well as be attached to the end of a spear. However, many of these points were stemmed, with indentions on the bottom of each side.

Hurst said these variations were made to accommodate changing survival techniques and mobility strategies as the Paleoindians became more territorial. But although technology changed during these periods, he said there is no right answer in terms of projectile point efficiency.

"Projectile points really do not become more advanced through time," Hurst said, "There is not one best projectile point design." 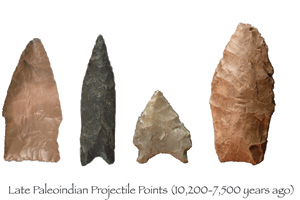 Late Paleoindians traveled shorter distances than the Folsom people, so there were more variations in projectile point styles during this period.

Throughout the years, excavations of sites have led researchers to conclude that all of the Paleoindian groups did, at one time, inhabit the area now known as Lubbock Lake Landmark.

Hurst said the Southern Plains region is recognized worldwide as the leading source of Paleoindian archaeological finds – indicating Lubbock has been part of a territory for more than 11,000 years.

Although many discoveries have already been made, Hurst said he and other researchers will continue in the quest to understand these hunters and gatherers, perhaps ultimately uncovering remnants of an even older existence.

"The Paleoindian record at the Landmark has great potential for understanding how past hunter-gatherer groups used the Southern High Plains Landscape," Hurst said. "Continued excavation will uncover new and important evidence regarding the past life ways of Paleoindian groups."