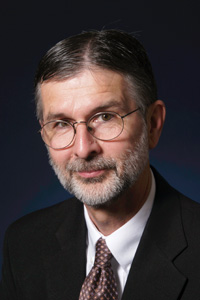 Galyean has received multiple awards from Texas Tech, other organizations and universities.

Officials at Texas Tech announced today (Feb. 11) that Michael Galyean will become the interim dean of the College of Agricultural Sciences and Natural Resources, effective July 1.

Current dean, John M. Burns, who took the position as an interim dean in September 2007 and then as permanent dean in April 2008, is retiring.

Galyean is a Horn professor and Thornton Distinguished Chair in beef cattle nutrition and management in Texas Tech's Department of Animal and Food Sciences.

"Michael's proven leadership skills will serve the college very well," Smith said. "He has the diverse background, knowledge and experience to lead the college during this interim period."

Previously he was assistant professor, associate professor, and professor in the Department of Animal and Range Sciences at the University of New Mexico from 1977 to 1990; professor and superintendent of the New Mexico State University Clayton Livestock Research Center from 1990 to 1996; and professor of animal science at West Texas A&M University and the Texas Agricultural Experiment Station in Amarillo from 1996 to 1997.