The Museum of Texas Tech University will host the exhibition Feb. 20-Aug. 7. 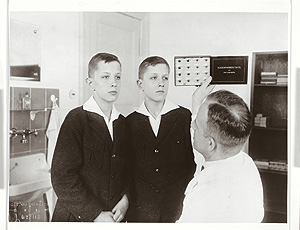 In his laboratory at a new eugenics institute in Berlin, geneticist Otmar von Verschuer compares the shape of twins' eyes during an anthropometric study.

After years of organizing, The Museum of Texas Tech University will host Deadly Medicine: Creating the Master Race, a travelling exhibition produced by the United States Holocaust Memorial Museum.

The exhibition, which explores how Nazis used the idea of genetic purification first on the mentally and physically disabled before implementing it for a radical racial purification to form the "master race," opens Feb. 20 in the Diamond M gallery and runs until Aug. 7.

Lubbock will be the only stop this exhibition will make in Texas before moving to New York and retiring.

Lynne Fallwell, an assistant professor of history at Texas Tech specializing in German and medical history, is one of the key organizers responsible for bringing the exhibition to Lubbock.

"I was a Fellow at the U.S. Holocaust Museum the summer they were putting Deadly Medicine together," Fallwell said. "They were looking for venues that had both medical schools and an arts and humanities school as well as places in the middle of the country that might not get exposed to this sort of an exhibition. Of course, I thought of Texas Tech. We seem to be the ideal center to house this sort of exhibition."

Though mainly associated with the Nazis, Fallwell said eugenics theory sprang from turn-of-the-20th century beliefs asserting that Charles Darwin's theories of "survival of the fittest" could be applied to humans.

Supporters, spanning the globe and political spectrum, believed that through careful controls on marriage and reproduction, a nation's genetic health could be improved. Some of its staunchest supporters included leaders in the United States, Great Britain and other parts of Western Europe, she said. 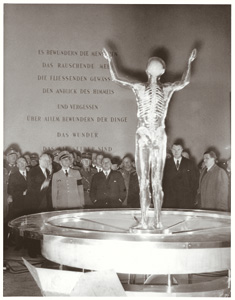 Officials at a health exhibition developed by the Nazi-controlled German Hygiene Museum, Dresden, 1935.

From 1933 to 1945, Nazi Germany carried out a campaign to "cleanse" German society of individuals viewed as biological threats to the nation's "health."

Enlisting the help of physicians and medically trained geneticists, psychiatrists and anthropologists, the Nazis developed racial health policies that began with the mass sterilization of "genetically diseased" people and ended with the near annihilation of European Jewry.

Eugenics and racial purity, she said, was the third front in Hitler's war. Besides the Western and Eastern Fronts, it became a quintessential part of the Nazi movement.

"We're often quick to look at the Nazis as a unique example of evil without looking at how they came together, and how this happened," Fallwell said. "There is universality to all humans here. This exhibition raises so many moral and ethical questions about medical practice. However, it's not just about medical ethics, though. It's also about how we treat other human beings. Why do we make the classifications that we do? Humans are pack animals, but why are we so quick to make distinctions among ourselves?"

To relate this history, the United States Holocaust Memorial Museum has assembled objects, photographs, documents, and historic film footage from European and American collections and presents them in settings evoking medical and scientific environments.

Deadly Medicine: Creating the Master Race inspires reflection on the continuing attraction of biological utopias that promote the possibility of human perfection. From the early 20th-century international eugenics movements to present-day dreams of eliminating inherited disabilities through genetic manipulation, the issues remain timely.