The College of Education facilitates 4-8 graders in worldwide moon log. 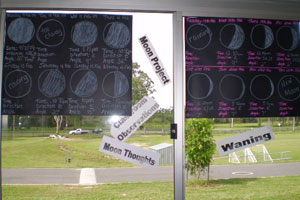 The MOON Project is connecting students throughout the world who track the angles and shapes of the moon and compare the data with other participating schools. Larger Version

A child camping at Big Bend spots a waxing crescent moon overhead and points, "it looks like a D." Meanwhile, oceans away, another child approaching the Sydney Opera House may decide that same moon looks more like a C. Who is right? The alphabets are the same; however it is their perspectives that are different.

The MOON Project – the acronym stands for More Observation of Nature – is a global project housed in Texas Tech's College of Education in collaboration with other universities around the world.

One of the project's goals is to get students outdoors to observe the world firsthand, said Walter Smith, chairman of the Department of Curriculum and Instruction. For the last 10 years the project has been a tool to teach scientific inquiry to young students across the globe.

"Students from around the world learn how the moon works from both their own local point of view and also a global perspective," Smith said. "Students share their observations and look for similarities and differences in how the moon appears.

"When we're seeing a waxing crescent moon in the northern hemisphere, we see it on the right hand side, but the students in Australia in the southern hemisphere see that same crescent moon on the left hand side. So they have an opportunity to learn not only to interpret what they're observing, but that the point of view of the observer affects how the world appears to the observer," Smith said.

The most basic lesson from the project is about lunar phases. More importantly, Smith said, teachers can get their students involved in long-term inquiry.

"Most teachers do hands-on science and often that's self-contained in a 40-minute class period or however long they have; teachers set up an experiment in such a way that the students are going to make this and that observation," Smith said. "But when they take students outside, and get them involved in nature, nature does whatever nature does. Sometimes it's cloudy, sometimes it's not. Sometimes the moon is visible at night, sometimes it's visible during daylight, which is at times a new revelation for the students. It's a whole lot messier than the self-contained classroom science experiment."

Cathy Box, who is now a professor at Lubbock Christian University, used the MOON Project when she taught in the Tahoka schools about five years ago.

"My kids were so excited and learned a lot about so many things that are important in science; looking at real data, the importance of reporting accurately, different perspectives, comparing data and looking for patterns, figuring out which data might be wrong, and of course, how the moon looks around the world," Box said.

Another powerful reason for teachers to get students involved in the MOON project, Smith said, is to get kids involved with other kids who are outside their community, to show them that there is more to the world than just the community in which they are living.

Students' writing skills may also benefit from participating in the project.

"Teachers tell me that when the students read the writing of the other students – and we organize it in such a way that each student gets the observations of nine other students and those nine students are spread out as far apart as they can be – they begin to realize that maybe they could have written better themselves so that their nine colleagues would better understand what was going on," Smith said.

The project's name was coined by Lynda Schiff in 2001 when she taught at Dzilth-Na-O-Dith-Hle Community Grant School on the Navajo Reservation in northwest New Mexico. Her fifth grade students were the first students in the MOON Project. 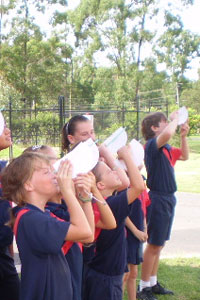 A class of Australian students measures the angle of the moon.

Under the leadership of Texas Tech, these universities have informally joined together in the I.V. STEM (International Virtual Science Technology Engineering Math) Classroom initiative to develop methods for students to work together internationally, via the Internet, in exemplary science, math and technology instruction.

The MOON Project was honored with the Ohaus Award for Innovations in Science Teaching in 2003 by the National Science Teachers Association.