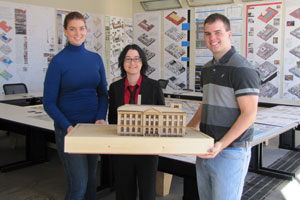 Texas Tech architecture students made a scale model of the Lubbock Post Office and Federal Building, which is designed in a modern adaptation of Italian Renaissance.

A 79-year-old Lubbock building is getting a second look based on its historical significance, thanks to a boost from the Texas Tech College of Architecture.

Upon its completion in 1932, the Lubbock Post Office and Federal Building at 800 Broadway served as a symbol of dramatic growth in population. The building was perceived as a modern adaptation of Italian Renaissance architecture, with gray granite steps flanked by iron lampposts leading to doors of bronze and glass. Overhead, bronze bas-relief sculptures are mounted on white marble panels. A dolphin, an eagle and a compass represent the transportation of mail via the oceans, the air and the earth.

For decades, this building was the center of federal activities until the construction of a new federal building in 1968. The original building was then used for various county offices until it fell into disrepair and was vacated in 1998. Since then, the once-majestic building barely endures the test of time, weather and neglect. A brass flagpole mounted on a front ledge has long since disappeared. Furthermore, leaks in the roof have damaged the ornate, decorative paintings, and historic courtroom ceiling.

"In Lubbock, I feel it especially important to recognize and maintain our history," said Bill McCay, Lubbock County Commissioner Precinct 1. "By calling attention to it now, we want to encourage residents to act while there is still time."

The cost to restore, let alone – maintain, a 28,000-square-foot building is difficult for any municipality, especially during the current economy. That is why in October 2010, Elizabeth Louden sent a letter of strong support to Preservation Texas, a statewide nonprofit organization that advocates for preserving the historic resources in Texas.

Louden, a professor in the College of Architecture, is also the faculty member directing a group of graduate students in a course titled Preservation Studio – Topical Design. She and the students had the opportunity to closely study the condition of the building and look for ways to help with its preservation through repurposing.

"This building was chosen as a topic of study precisely because it is in jeopardy of loss via benign neglect, as well as for the clearly important role that it has played in the growth and development of this region," Louden said.

Louden's students assessed the building, its structure, materials and finishes. They utilized a laser scan of the interior and exterior, collected historic photographs and the 1931 blueprints. Together they concluded that the building was in reasonably sound condition and could be rehabilitated with the proper financial backing. 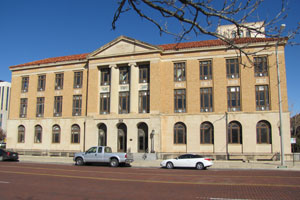 The outside of the Lubbock Post Office and Federal Building.

Preservation Texas officials announced their selections Feb. 9, on the steps of the Texas State Capitol. The Lubbock Post Office and Federal Building was among 10 sites included in their eighth annual list of Texas' Most Endangered Historic Places.While no commitments have been made at this time, past sites have seen energized conservation and restoration efforts and additional funding.

"Texas is a state with enormous diversity and significant historic resources. Yet each year, more and more of the state's historic properties fall victim to commercial development, neglect or suburban sprawl," said Jim Ray, president of Preservation Texas Inc., a statewide partner of the National Trust for Historic Preservation. "The sites on our 2011 list represent the most imminent needs as well as the highest probability for positive outcome."

As part of the course, Louden's students prepared 12 proposals for the adaptive use of the building. Graduate student Marshall Drennan proposed a satellite campus for graduate studies in the College of Architecture, while Kristin Tomdale suggested nightclubs and entertainment. Other ideas include state of the art facilities for physical therapy or fitness, a recording studio, cinema and film school, even a Ferrari showroom. They took their ideas a step further, by utilizing sustainable technology such rainwater harvesting and waterless urinals.

Their model and drawings are now on display in downtown Lubbock at Urban Tech, a design center located at the Louise Hopkins Underwood Center for the Arts.