The newly discovered crocodile came on the scene about the same time as dinosaurs began evolving. 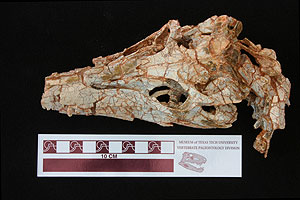 This newly discovered crocodile ancestor came on the scene about the same time as dinosaurs began evolving.

In the tropical rainforests of West Texas, which looked more like Costa Rica some 225 million years before cattle ranches and cotton fields would dot the landscape, it hunted by chasing and wrapping its tooth-filled jaws around its prey.

Modern man probably wouldn't recognize its body, which was built more for land speed than aquatic surprise, said Sankar Chatterjee, curator of paleontology at the Museum of Texas Tech. That is, until we saw the eyes and unmistakable head of possibly the oldest crocodile ancestor found to date.

The fossil was discovered on a ranch and prepared by Doug Cunningham, fossil preparator at the Museum of Texas Tech. Chatterjee said he has yet to name the animal, and it probably won't debut in scientific literature for another two years.

Thanks to a new CT scanner at Texas Tech's Department of Petroleum Engineering, he was able to look inside the skull of this animal to study the brain case and sinus cavities.

"This is a brand new animal and possibly the great-grandmother of all crocodiles," he said. "It was still walking. These early crocodiles look like your typical terrestrial animals. An intact skull is very rare to find. One of the exciting things is we were able to see inside its brain case with the CT scan. We can see the brain evolved very slowly."

Shameem Siddiqui, the Kerr-McGee Professor of Petroleum Engineering, collaborated with Chatterjee on the project. He said his CT scanner usually is used to study fluid flow through different types of rocks. However, it also can serve as a tool for imaging fossilized bones, and Siddiqui paired with Chatterjee this fall to learn more about the crocodile. 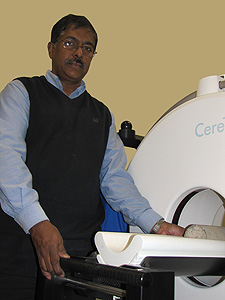 Siddiqui and the other researchers were able to find hidden pieces of the crocodile when samples encrusted in rock were scanned.

"When we scanned one of the samples with bones encrusted in the rock, we were able to find some hidden pieces of the crocodile," Siddiqui said. "That was exciting. When we did the 3-D imaging of the skull, it was equally as exciting. Already, Sankar and I have been talking about using the CT scanner to measure bone density of more recent crocodiles and compare the data with bone densities of this ancient crocodile."

The newly discovered crocodile ancestor came on the scene about the same time as dinosaurs began evolving, Chatterjee said. The animal's hind limbs, hip girdle and tail clearly suggest this was a land animal. Bones show the animal was adapted to walking or running. In modern aquatic crocodiles, the legs are small, and the tail creates the forward thrust by undulation it needs to move quickly in the water.
The strong similarity lies in the ankle joint and braincase, he said.

"It has lots of sinuses in the braincase like those of modern crocs," Chatterjee said. "These sinuses may be linked to their vocalization. Unlike most reptiles, crocs are very vocal and hear well. We described a similar animal from China that gives us some idea about the way this animal lived.

"Leaving land for the water was probably the smartest thing crocodiles and alligators did. That way, they didn't encounter the dinosaurs like other animals did."