Gebisa Eleta will speak on 'Feeding More with Less: Humanity's Grand Challenge of the 21st Century' at 3 p.m. Jan. 31. 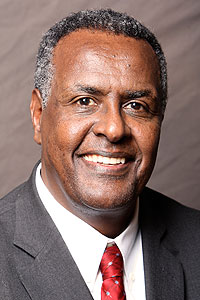 Ejeta received the World Food Prize for his research, which led to increased availability of sorghum in Africa.

With a clear focus on world hunger issues, an internationally recognized plant breeder from Purdue University will highlight the latest installment of the Texas Tech Department of Plant and Soil Science's newly launched Distinguished Lecture Series.

Gebisa Ejeta, a distinguished professor with Purdue's Department of Agronomy, will speak on "Feeding More with Less: Humanity's Grand Challenge of the 21st Century" at 3 p.m. Jan. 31 in the Matador Room of the Student Union Building. The talk is free and open to the public.

In 2009 Ejeta received the World Food Prize, an honor that is considered by many to be the Nobel Prize of agriculture. He won the prize for his research, which led to increased availability of sorghum in Africa. Sorghum is one of the world's top cereal grains.

His research led to the development of sorghum varieties that can stand up to drought and parasitic weeds, which are two of the most harmful environmental stresses on the grain. Sorghum is the major food source for nearly 500 million people in Africa.

Raised in West-Central Ethiopia, Ejeta received his bachelor's degree in plant sciences from Alemaya College. His master's and doctorate degrees in plant breeding and genetics are from Purdue University. Before joining the faculty, he worked with the International Crop Research Institute for the Semi-arid Tropics and conducted seminal sorghum research in Sudan for five years.

"Bringing high profile speakers like this is an exciting development that improves the quality of our graduate education," said Cody Zilverberg, president of Texas Tech's Plant and Soil Science Graduate Council. The distinguished lecture series is made possible by funding support from the J.A. Love Endowment in the Department of Plant and Soil Science.