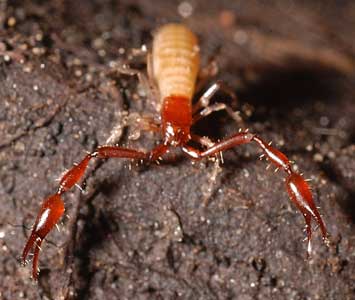 Its venom-filled claw at the ready, Paobisium yosemite waits for prey to amble by it.

It waits blindly in the darkness of granite caves in Yosemite National Park, moving little to conserve energy.

Its venom-filled claw at the ready, it waits for prey to amble by it. Giving a quick tap to a possible meal, this newly discovered, blind pseudoscorpion will grab the prey and wait for the poison to take hold. Then, it will eat.

Thankfully, at less than half an inch in length with legs outstretched, Parobisium yosemite poses little threat to humans or any other animals larger than an eighth of an inch, said James C. Cokendolpher, a research scientist and assistant curator of invertebrates at The Museum of Texas Tech University.

"This pseudoscorpion was originally found three or four years ago," Cokendolpher said. "There was a team from Austin that was hired to go into some of the caves in Yosemite National Park to do a survey and map some of the caves. Jean was one of the first ones to discover the species. She and others caught two of them, which were sent to me for identification. Once we discovered it was a species unknown to science, they went back and collected in some other areas to see if the species was there."

Most cave-dwelling species live in limestone caves, he said, where more humidity and access to food makes them more hospitable for life. Finding Parobisium yosemite in the caves formed from granite rockfalls came as a surprise.

It might be the second discovered cave-dwelling pseudoscorpion that lives in these granite talus caves in the world, he said. 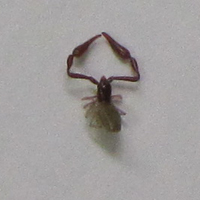 With claws in the front, pseudoscorpions have eight legs, but no long post-abdomen with a stinger like a real scorpion.

Strange to behold, pseudoscorpions are small arachnid predators, Cokendolpher said. With claws in the front, the animals have eight legs, but no long post-abdomen with a stinger like a real scorpion. Pseudoscorpions are an order of arachnids unto themselves, such as ticks, mites, daddy longlegs and vinegaroons.

"This pseudoscorpion is as large as many of the other cave-dwelling species," Cokendolpher said, explaining most of the more than 3,000 species of pseudoscorpions are much smaller. "Cave species are generally larger, have longer appendages, lighter coloration and are missing all the eyes. The canyon where it was found was made by a glacier during an ice age millions of years ago. Through time, rubble with larger rocks would fall and create piles with caves or subterranean voids. We think that's where this animal was trapped and evolved into the species that it is now."

Cokendolpher explained the animal doesn't move around much, probably to conserve energy.

"I kept a couple of them in the laboratory for quite a while," he said. "They basically sat and did nothing for much of the time. We kept them in Petri dishes with plaster of Paris that was moistened so it was more like cave conditions. When we introduced other animals into the Petri dish it would go over and tap the animal. When it did that, it was able to sense chemical cues there such as identification, how large the item was and whether it was something suitable to eat. Out of several weeks we kept them, the only thing that was eaten was a tiny spider. Like many of other cave animals, it doesn't need a lot of nourishment. That's good for them in a food-poor environment."